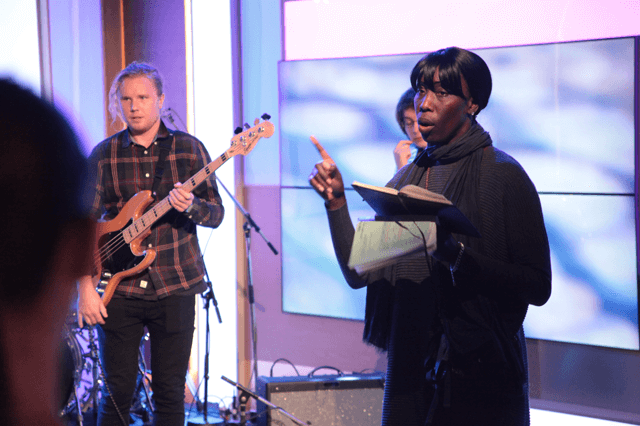 Abigail Dankwa is a versatile, creative and editorial director, credited as one of Edinburgh TV Festival’s “Ones to Watch” and a BAFTA x BFi Crew participant, with experience directing complex productions, from 24 Hours in A&E, Big Brother and Celebrity Big Brother, and quiz shows, such as Tipping Point, !mpossible, WonderBall (BBC Scotland’s launch quiz show), to Outside Broadcast’s, directing the Champions League Final in Milan.

With a background as Stage Manager for the London Olympics & Paralympics Games Opening and Closing Ceremonies and Floor Manager for the UEFA Champions League & Super Cup Finals in Lisbon, Berlin, Trondheim and Skopje.

At school I did a GCSE in Media Studies, and I was allowed to take the cameras home at the weekend, when I would rope my sisters in and we’d take a trip from North London to Leicester Square and make “TV Shows”. I didn’t really know what I was doing or what a director was, I just knew I liked being in charge (well, I am the eldest).

It wasn’t until years later via careers as a model booker, fashion photographer’s agent and managing editor of a digital channel, I decided to do an MA to make up for the fact that I never completed my first degree. Originally, I was supposed to do a documentary degree but for personal reasons I couldn’t start in September 2009. Long story short, after a friend cajoled me, I applied to the NFTS.

I was luckily enough to get scholarships, without them I wouldn’t have been able to go. I applied to do the Producing and Entertainment MA as I felt it suited my personality better and by January 2010 I was in. I decided that when I graduated, I would work towards becoming an entertainment producer, and that I’d concentrate on production. I didn’t really care about learning to multi-camera direct. Then one day, I sat in the director’s chair, and everything changed.

The major obstacles are that there aren’t many places for a new multi-camera director (MCD) to learn and get their flying hours in. Children’s TV, which used to be a great training ground, seems to use experienced directors. MTV Studios, the Big Breakfast and T4 were also places you used to be able to go in order to get experience. They obviously don’t exist any more and there aren’t that many slots in the schedule for new shows, to learn on. Indies and Broadcasters are quite risk averse. If you haven’t done “their” type of show before, it can be hard to get a look in, but that seems to be the case through all roles and genres in TV.

The other issue is that with other types of directing, as long as you have a script (fiction), a crew and equipment or an idea (documentary) and willing contributors you can go off and shoot and learn your craft immediately after graduating. As a multi-camera director, you can’t just go off and shoot. You obviously need a script (or not if it’s fixed rig) the attending crew and equipment, but most of all you need a studio, Outside Broadcast van or precinct and a gallery. You’re also reliant on a commissioner and Indie ordering the show.

I’m still honing it! I did another MCD course with DUK four years after I graduated. The aim was to get new MCDs into the industry. There were six of us on the course, three women and three men. The guys are all working (or were up until the pandemic), I’m the only woman out of the group still directing, not as much as the guys and that’s not for want of trying! I have also shadowed quite a bit.

I think the main obstacle is because I’ve had other careers. I don’t have years of experience and contacts, so I’ve really had to work at being visible and getting in front of the right people. The other obstacle is that I don’t look like the “typical” director. But I bring other fresh ideas, as someone who is not jaded by the industry. I’m also a bit weird in that I multi-camera and fixed rig direct, I love them both for different reasons, most directors do one or the other.

I’m sitting here writing this while watching the Rolling Stones at Hyde Park (I really want to direct music Outside Broadcast) thinking, if I have a career half as long as theirs, I’d be a happy and lucky lady!

I’ve had direct and indirect breaks. Straight after graduation I worked as one of the Stage Managers on London 2012 Olympics and Paralympics Opening and Closing Ceremonies, working with Danny Boyle and Hamish Hamilton. I think having that on my CV opened doors because everyone wanted to know what it was like working on it (great but tiring, BTW).

I then worked as a floor manager on various UEFA Champions League Finals, where I was promoted and (technically) directed my first multi-camera OB for their blue carpet arrivals at the Milan final. We were promised A-list celebs, we got Olly Murs, who to be fair was lovely.

However, I consider my first proper directing credit was as a house gallery director on Big Brother. That was baptism of fire! They had taken on five new directors to train because some of the main directors had jumped ship to a new show (Love Island!). I was the only one who hadn’t directed anything. I hated it at first, (because its nothing like multi-camera directing) until I didn’t, then it was a lot of fun. Since then I have directed Celebrity Big Brother, GPs Behind Closed Doors, and 24 Hours in A&E as a Fixed Rig Director. As a MCD, I’ve got credits on Tipping Point, Impossible WonderBall and Love Song.

As a multi-camera director you don’t have an agent, you are your own agent, and as an ex-agent its very different doing it for yourself. It’s a lot of emails, “coffees” and waiting. A lot of waiting.

It’s a great industry (for the most part). Remember to bring your sense of humour and build your resilience on the way. I love my job and hopefully things will change for the better for everyone, when we come out the other side of the pandemic. Whatever happens, stay strong, find your tribe (people who’ll “pop corks” with you, to congratulate or commiserate when you need them to). Keep coming up with ideas while we’re in this weird stage, challenge your brain but also chill. It will be different when we get back up and running, but we will be back and it will be your job to find YOUR route in because we need you. Stay strong and safe.