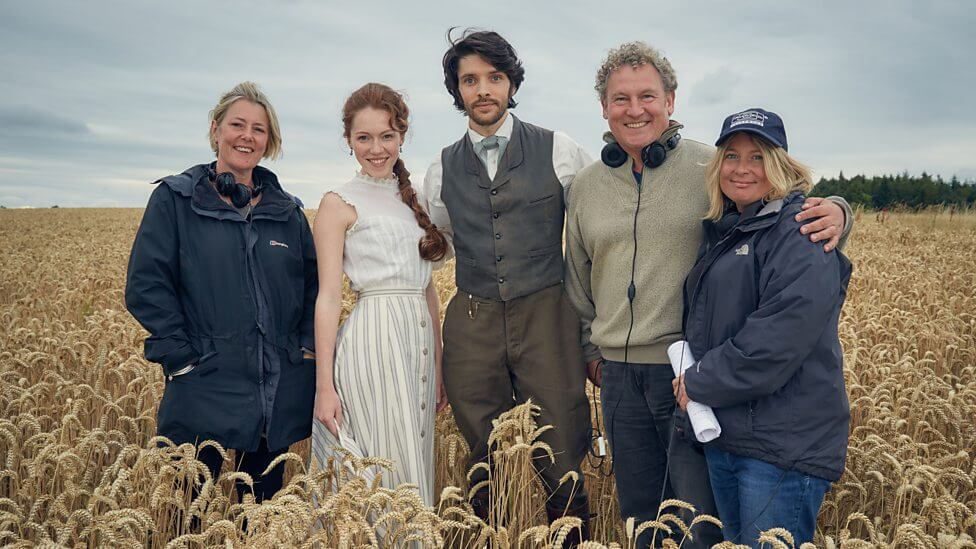 Alice Troughton is an internationally-acclaimed director working between the UK and the US. Having lead directed and exec-produced Baghdad Central (2020) for Channel 4, she is also known for her work on the award-winning shows The Living and The Dead, Cucumber and Dr Who. She’s currently finishing Tin Star for Sky and about to shoot See 2 for Apple.

I was 32 years old when I realised that I was going to be a television director. I had winged my way onto the Doctors Directing course in 2002. I say “winged”, but it had been ten years since leaving university and then being several different people – a fringe-theatre director, a struggling writer in Brighton doing care work to supplement income and then several years as an Uber Assistant to Very Important Men – first at ICM and then at BBC Films.

I’d got on the course by the skin of my teeth, aided by the advice of it’s greatest alumni, SJ Clarkson – and the sheer adrenaline rush when we finally shot a day. I thought “how do people do it?” Because it made me feel sick with the rush and the panic. But Mike Hobson, who is now the head Exec at Doctors, but back then was a first assistant director, gave me the best advice – “Just finish your day. That’s what you have to do. Get everything in the can”. He was right and it’s very good advice for discipline and efficiency.

I’m currently a bit addicted to Celebrity SAS and particularly the sageness of Foxy. He has this great bit in his book when he talks to the director of the TV programme and they acknowledge it’s the same thrill – it’s a mission to shoot. Haha. Here it is:

“Yes, mate,’ I said. ‘And you probably won’t believe this, and you’ll cringe and flinch at me for saying it, but fundamentally the people in this [television] industry are no different from experienced soldiers at the top end, apart from the fact that people stereotype you as a bunch of left-wing sods and us as a bunch of right-wing hooligans. I’m generalising in a very bad way, but you’re people who like to be busy, you like to have a lot of things on, you like to pressurise yourselves, push yourselves out of your comfort zone. You get itchy feet, you’re always travelling, and when you get a chance to let your hair down you go ahead and let your bloody hair down.’”

Battle Scars: A Story of War and All That Follows by Jason Fox.

So there you go, we are basically SAS adrenaline junkies.

You know, I’m meeting the same Industry people today. Be very aware, how you are now at entry level is how you will be remembered. Truculent? Entitled? Selfish? The Industry will remember.

I started off thinking I was going to be a theatre director. I’d got into the stage management side of the Ulster Youth Theatre and the combination of first sex, freedom, good friends and the thrill of being part of something bigger, really hooked me in (and still does, bar the happy marriage bit).

I was average academically – did my degree in Drama at Kent, a relatively dull university that had a strong drama reputation. I hubristically directed Hamlet in my 2nd year, a huge and sprawling production I still have nightmares about (the band thought on one night it would be funny to play the Blackadder theme tune for Hamlet’s entrance).

I did lots of jobs to earn money – washed actors knickers and was a really good DSM – loved calling the cues in the box, loved being backstage, liked the people. Kenneth Branagh was our Patron and we all got jobs working with the Renaissance Theatre Company and got drunk with Emma Thompson. Star struck!

Anyhow, after leaving these jobs and travelling, I managed to make a short film in India. I didn’t know what I was doing but it had the seeds of something. My very first ever shot was that of a full moon over the Himalayas, on Super 16mm. I got my friend Nigel Clark from Dodgy to do the music and its still one of my favourite tracks. It’s called Refuge.

Later I did another, very different short film called Doris The Builder, funded through Screen West Midlands. It was a short film based on a true story from my hometown, Aylesbury, about a builder who took a load of breast-enhancing hormones for a dare. (This was fairly normal for Aylesbury.) It was funny and kooky and we found this great guy Tom Ellis to play Doris.

I really messed up this film politically. I was directing episodic drama by then and the producers were very worried I had a “television sensibility”. This patronising attitude hugely upset me at the time, although I was still definitely learning my craft. One of the producers said I lacked all emotional intelligence, the other that I was too emotional. I fell out badly with them and they later all fell out with each other to the ultimate detriment of the film. It knocked my confidence at a time that was nearly disastrous. Luckily, straight after that I got hired by Russell T for Torchwood and a new and brilliant area of developing female gaze drama opened up for me – that of Sci Fi – Run by an outstanding show-runner with very clear ideas and style, who taught me a huge amount about the craft.

Now I am older and wiser, I see what happened on Doris The Builder as a smaller version of the television vs film snobbery that still exists today but which really, really needs to move on. The old-school thinking was that television was a poor relation to film; the budgets were much smaller, and the disciplines different. It was considered an inferior craft. Also, it was very frowned upon that I was making episodes of EastEnders in my post-production period, even though there was no payment to make the short. This is still a real problem today – to keep yourself available to make your film, you can’t take other work that might tie you up. So the people who can afford to do it – mainly middle-class white trustfunders are the ones who have historically flourished. Privilege at work. Then the second film – well, that’s torturous.

When I was younger I did loads of different jobs, but all learning about teamwork and creativity. I was very happy to shadow and did so several times and I learnt something different with each job. There are many different routes to get to where you want to go, and I’m not sure many of us really know where that is. But giving it a stab – rolling the dice – seems to be the thing that makes a difference. I’d never wanted to go to the US but they liked me, being a female director with CGI experience, so I gave it a go and lo and behold – a pension!

Having said that, I had the best time with the cast and floor crew on Doris and on the whole that is the experience that matters. As long as you like the cast and the team you are working with, and they like you , you do need to be able to shut out the above- the- line politics. They might love you, they might sack you.

The only other time I’ve thought of doing something different – chucking it in – was doing the first job after having a baby. Hard going back to work; hard feeling my priorities had changed. I had a cameraman that bullied me – I would turn round and catch him eye-rolling behind me or making a wanker gesture. At the wrap party he got pissed, staggered up to me and said, “Thing is, I’m a boy from the Valleys and I can’t take orders from a woman”.

Nowadays, I’d have him straight into the production company with a complaint. As it was, I told my husband the next day (between sobs) that I was thinking of changing jobs. He was properly outraged, and said if I wanted to change, it wouldn’t be because of some shit forcing me out. And you know, of course he was right. But it still takes a strong stomach to deal with the level of sexism – women directors still only at 14 per cent – and the passive aggressive fallout from a certain level of toxic masculinity that is terrified and snarling about Me Too. I get called a “force of nature” a lot through gritted teeth. Bring it on!