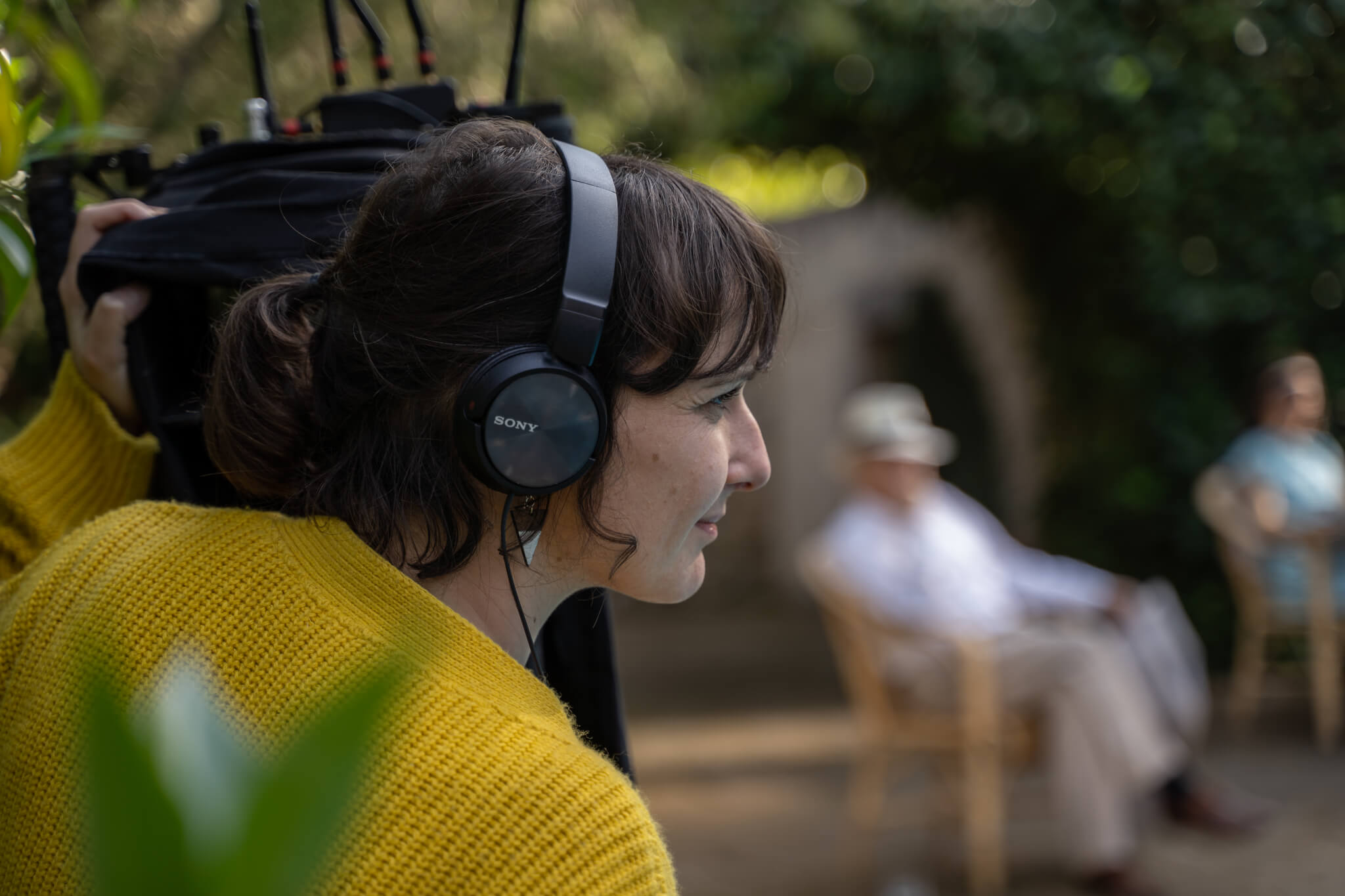 Andrea is a BAFTA nominated and RTS-winning filmmaker from Northern Ireland. Her short film The Party was nominated for a BAFTA for Best British Short, and was also a nominee at the European Film Awards in 2017. It picked up several prizes at film festivals internationally.

In television drama, Andrea most recently directed a standalone episode of AMC’s new anthology series Soulmates (starring Charlie Heaton and Malin Akerman), set to air later this year. She was the lead director on the BBC’s flagship period drama The Trial of Christine Keeler (2019) which aired to much critical acclaim and press attention in December 2019. Prior to this, she directed Come Home (2018), a three-part drama set in Belfast (BBC One/RED Productions), winning a Royal Television Society NI Award for Best Drama. Come Home also won the RTS Award for Best Editing, with Christopher Eccleston winning an International Emmy nomination for his performance. Previously, she directed the second block of BBC3’s hit drama-thriller Clique (Series 1).

Andrea is a graduate of the UK’s National Film and Television School, Channel 4’s Coming Up scheme, and the EIFF Talent Lab. She is currently working between directing television drama and developing feature projects, including the iFeatures/BFI-supported film, Across The Water.

I studied drama at school and was always more into the writing, devising and directing side of things, so I went to university to learn more about making theatre and chose to do a drama degree (at Queen Margaret in Edinburgh). Whilst there, I developed some skills in devising, directing and writing but it was mostly theory-based and I found myself specialising in theatre criticism and writing reviews for The List theatre magazine during The Fringe – which felt like the standing on the wrong end of the fence completely. I’d applied to specialise in directing for my final year, but they were only taking 4 students per year, and I didn’t get a place. After uni, I applied for lots of opportunities including runner jobs and got a job as a production runner on a film set in Belfast for a few months. I got to be on set and on location so the process of filmmaking was demystified. Filmmaking was not on my radar before then (I’d never considered filmmaking at school or at uni because I was on the theatre path, but also because subconsciously it felt out of reach, I guess). After that experience of being a runner, I realised that I’d like to try to teach myself how to make short films and learn more about filmmaking and directing.

Once you knew you wanted to pursue a career as a director, what were your first steps in achieving this goal

My runner job had been in Belfast but I didn’t get to capitalise on the contacts I’d made there, because I went straight back to Edinburgh. In hindsight, I should’ve stayed in Belfast and tried to get onto another film to get the ball rolling, but I had flatmates and a life in Edinburgh so I went back there and applied for stuff in Scotland, but to no avail.

I worked for a theatre company in Glasgow in the office for a while, doing funding applications and planning workshops – but I was kidding myself that this was actually a creative job, just because it was in a creative organisation, and I just felt quite envious of the theatre makers and workshop leaders who would come and go while I was sitting in the office organising things.

I applied for every single short film scheme that I could find and got involved in several little projects. I made a few bits and pieces using trial and error and then an opportunity came up to work on a devised piece with an organisation that were involved in community arts. I’d done some community arts training during my time at uni so I ran some workshops in storytelling and that sort of thing. That company (Pilton Video, now Screen Education Edinburgh) were incredibly supportive and supported me through the making of a devised short film within a community context. Then, I applied for a funded scheme they were running for new voices to make authored work, and I wrote my own script and made my own first short film, with a lot of mentoring and support.

By this point, I knew I wanted to go to film school and had NFTS in my sights – as it was undoubtedly the best film school in the UK. I’d applied the year before with the devised film, but that wasn’t written by me nor was it personal enough or good enough, so I made another film and tried to make it personal and meaningful. I was luckily nominated for a BAFTA Scotland award for my script, and the lead actress won the award in her category. At that BAFTA Scotland ceremony, I met a talent scout for NFTS who encouraged me to apply again and gave my application his stamp of approval (which probably helped a lot when the staff were reviewing applications).

I spent two years at film school which was amazing and I learned so much. I made four short films there and some of them got into big festivals which was undoubtedly a boost of confidence. However, I did for a long time have an underlying insecurity that my work wasn’t good enough and I was very critical and hard on myself. I was very disappointed with my graduation film (although in hindsight I am proud of it), because there is so much pressure at NFTS to create the world’s best short film and win huge awards! The tutors don’t apply that pressure to their students but the institution comes loaded with expectations of its students, because of the success of the graduates who’d come before us. In some ways it was inspiring and in other ways it was intimidating and uncomfortable. So I think my first big setback was self-generated criticism and after graduation as I felt like I had not done well enough and I lacked confidence.

Struggling financially was the next big hurdle as I’d gone to film school on a wing and a prayer, with no savings, and my time there was fully financed by a combination of grants and bank loans. The bank wanted their money back too quickly and I struggled so much. I worked in a call centre and moved to the suburbs and felt very low and disconnected. It took a long time to pull myself out of that situation but I kept on applying for schemes and opportunities.

The final hurdle is that, to get a break, someone needs to give you that break! So it can be challenging to get someone to take that chance on you. You need to present yourself as being quite confident and promote yourself a bit. If your films at film school didn’t win that BAFTA or other big awards, you’re just in this giant pot of talented people who all want the same thing you do, but perhaps didn’t cut though at that film-school stage, so it’s very competitive and difficult. You have to just keep going and believe in yourself – or that’s what I tried to do in spite of the insecurities and worries.

I had many rejection letters from festivals and from funding opportunities and work opportunities, and I could’ve viewed them as setbacks but I actually think it’s par for the course. My biggest set back initially was financial, and figuring out how to keep going – to make money whist trying to make more films and eventually get paid as a director.I went into teaching film at a creative media college, which was great, and also quite inspiring to see undergrads making work and developing their craft. It was a fairly long road for me towards working as a director – it took a a few years after film school to get hired to direct something, and then another few years to get paid properly and consistently. Although I realise that not everybody has the goal to get paid properly as it’s such an artistic pursuit, and that definitely wasn’t my goal in the beginning. But at some point I wanted to create a sustainable future and work towards paying off my mountains of debt whilst still working towards doing something I love and getting onto projects where I can have a voice.

I realised quite early on with my first authored short (The Flyer – which I’d made before film school), that I wanted to make social-realist leaning, personal films. So I saw my craft very much as being about writing as well as directing and I wrote all of my short films whilst at NFTS. I honed my craft through trial and error and sometimes doing a genre outside my comfort zone. I kept fairly detailed journals of things I’d learned, after making every single film, and I still re-read those insights that I gained early on sometimes and find them useful. You learn from your mistakes basically, and I learned to see them as stepping stones to a better understanding. I read books and did online courses on subjects such as working with actors – I also did a course in working with actors via The Directors Guild, and ran an actor’s workshop for directors with some of my peers. I always chose to see the story and the performances as the two cornerstones of any quality work, and so I probably neglected learning the actual craft of technical directing in a more deliberate way. But I eventually learned through trial and error, and developed editing skills and also edited some of my own shorts. Editing your own shorts is a fantastic way to learn about directing, I think, because you very quickly realise what you’re missing or what you should’ve done differently. Shadowing the TV director on the scheme after NFTS was also an eye opener in terms of learning about professionalism and so I focused on getting better at that – from a purely professional viewpoint in terms of shooting competently, planning properly, and making the day. I’ve been working in TV drama for a while now and I love it and all the challenges it brings. I am also very much looking forward to getting back to a more personal style of filmmaking with some of the feature films that I am developing and writing.

My training route after NFTS was I applied for a funded TV shadowing scheme via Northern Ireland Screen where I got paid a basic living allowance to spend time shadowing a director on a TV show – which was an amazing opportunity and I learned a lot. Then I got to direct an episode of that series the following year. I applied for the Channel 4 Coming Up scheme for new directors/writers and got accepted onto that, and directed a short TV drama.  I made another funded short film – financed by the Irish Film Board (now Screen Ireland) – and that film (The Party) got me in the door to meet more TV companies and I got a job directing the second block of Clique (BBC3).  The Party was later nominated for a BAFTA for Best British Short and I have been working consistently ever since. I think I managed to get myself into work by constantly applying for funded opportunities and schemes, learning to take the knocks with the wins, and persisting!  I would say my ‘break’ was on Clique, with the Coming Up scheme providing a huge stepping stone towards that, and The Party demonstrating my filmmaking style more clearly.