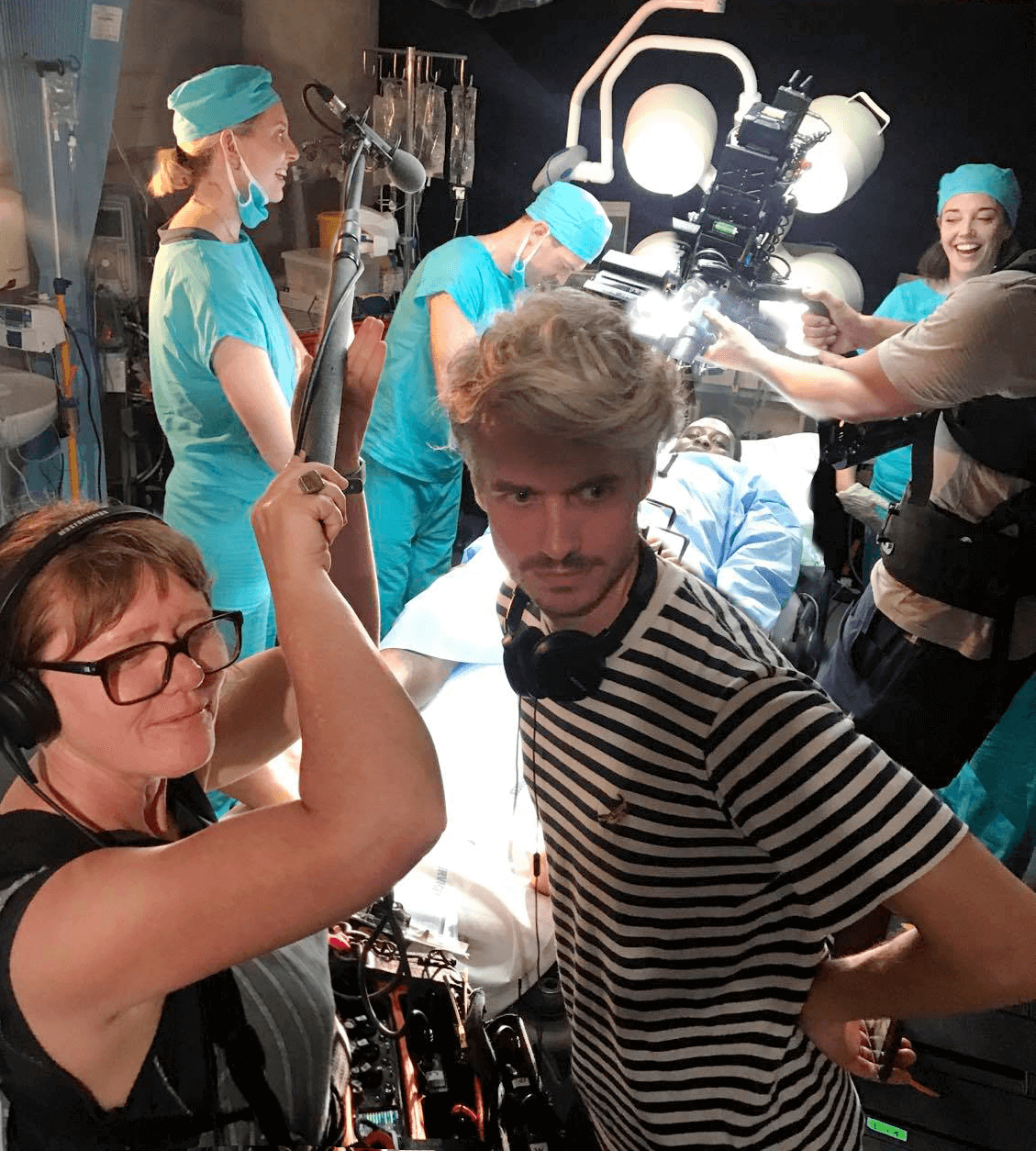 Ben Mallaby’s Island Queen, written by and starring Nat Luurtsema, was nominated for a BAFTA for Best Short Film in 2014. Described by Peter Bradshaw in The Guardian as “an excellent, laidback piece”, the quirky comedy also won Best Comedy at the European Independent Film Festival.

Ben’s short Battlecock! premiered at the 2013 BFI London Film Festival and his sci-fi comedy short TimeHoles rocketed to over 150,000 views on Vimeo when promoted as a Staff Pick. He has recently completed the second series of Climaxed for BBC3 with Tiger Aspect.

He is on Hoot Commercials and Unit’s roster of Comedy Director’s and works alongside their creative teams servicing content and production for agencies and brands. He is also the co-founder of comedy production company Mister Tibbs with Sami Abusamra.

I had a friend while I was in primary school who was a bit older who loved filmmaking and we spent a lot of time watching films and shooting really dumb shorts with our other friends, Rocky training montages, ninjas, silly things like that. Then at secondary school I met another guy who was also really into film and we carried on, but I hadn’t realised it could be a career until my dad bought me Clerks, that film really opened my eyes. When I looked into it I couldn’t believe there were courses in filmmaking at university, so that’s what I did.

I did the course and was always focused on being the director, I felt like I had the right mentality, but I had no idea how to move forward. I didn’t have any contacts and left with no real sense of how to navigate the industry, so I did an MA at Bournemouth. The MA helped a lot more, not because my films were better, but because of the people I met. When I graduated, I started off as a freelancing one-man band, I’d shoot and edit for anyone I could find, usually corporate. The issue with this path for me was that the jobs weren’t getting bigger, or more reliable, I was taking the same small fee and always felt I was grappling around for work. Around this time I looked for another source of income and starting lecturing in film at my old uni. I used to worry it was dividing my attention and slowing down my freelancing, and it was, but I’m also constantly surprised at how many of my peers also have other jobs to keep them afloat, it doesn’t feel like something people willingly discuss until after they leave it behind.

Funnily enough it was my students who opened my eyes to the wider world of filmmaking, they started playing at festivals with their shorts, something I’d never done. It gave me a fire to start working creatively again. I asked a very kind client of mine if he wanted to support me in return for a producer credit on a short film and he gave me a grand. I made a romantic film in the style of Before Sunset in Vienna with a very small but amazing team (only four of us including actors) and after a dozens of rejections I was accepted into a small festival. It was all I needed to keep going.

Probably the biggest steer in my career happened through chance, during my MA I lived with a burgeoning comedian and we used to shoot silly things together. We got back together to develop an idea with big production values which we could shoot for nothing, the intention was to put it online like an SNL digital short popular at the time. Only on a whim did I submit it to a festival and it got in, it was a sketch really, only 2 minutes long, but it would play anywhere I submitted it, not that I was aiming high. But it was a massive shot of confidence and from that point on I decided to focus on comedy

The next film set up my career for the next decade, at this point I was still just freelancing on corporates or behind-the-scenes style films, nothing industry related at all. My teaching was still my main source of income, but I felt like I had some good momentum and asked for another loan from the client who financed my first film. This film did very little business at the festivals but played at a BAFTA qualifier, something I only discovered by accident, a process I went through on a whim out of curiosity, something I could teach the students once I’d been through it. Anyway, the fluke nomination changed people’s perception of me entirely. The writer and I had been developing a feature and had attached a producer, who unfortunately turned out to be a fraud, but before we realised this I had been able to acquire representation for film and TV, and attach myself to a comedy production company who represented me for adverts. I was now doing the kind of work I’d always hoped I could, I’d never even assumed I could get near TV or features, but now it felt like it might be a possibility. Two friends from university attached me to a show they were developing which ended up getting 12 episodes on BBC3’s YouTube channel. I’d hoped that it would be my calling card and lead to bigger things, that was about three years ago.

I wanted to use this time to talk about opportunities which don’t lead anywhere, I know a lot of people contributing to this excellent site are on the up and things worked out for them, and as I read them it causes me a great deal of anxiety, I wanted to talk about losing momentum.

In my case the production company I worked for went under, losing the feature led to all of that propulsion we had disappearing, the BBC3 shorts weren’t picked up for series. You spend time looking for where to lay the blame, other directors were able to move from one opportunity to the next, they were good at building relationships with the right people, they’re bullish and fight their way into the room, maybe that was my issue I thought. There’s this fear as you get older as well that you’re losing relevance and that unless you prove yourself with a show on TV quite young, that you’re going to miss your opportunity altogether

The truth is that the film I was working on was unlikely to have the impact it would have needed, the BBC3 series had done more positive work for me than I’d given it credit. I did eventually get another opportunity to make a pilot for BBC3 and two things led to that, it was the same production company as the previous shorts and I’d proven myself to some extent with them. The other reason is that came down to how many shorts I made with different comedians, I’d made a short about four years prior with a comedy duo, one of whom ended up being the writer on this pilot. There is so much to be said for plugging away, making the work, working with new people, developing shows, fostering relationships and hoping something clicks.

Some people just have it, they have a clear perspective and know how to achieve it, they can propel themselves into the industry with a few shorts, and that’s amazing, but it wasn’t my way. I try to make as much as possible, some big, some small, with as many new people as possible, I try to keep the films cheap and I utilise my students as much as possible. It’s about trying to find collaborators who improve the work and I’ve been lucky to work with so many talented people.

The best thing I think you can find is someone honest and with a good eye to appraise your work. It’s so hard to find someone you trust, but also being critical of your own work is key and I think too many people who are not getting where they want are perhaps not learning enough from their previous films.

Another thing I’d recommend is somehow trying to find someone to mentor you, ideally someone who’s into your style. It’s not about getting work through them, but having someone in those early days who can explain everything to you could save a lot of time, it’s something I’m really focused on with my teaching.

There’s no question the BAFTA nomination was my big break. It was the only film that year that didn’t have a 50K budget, the other teams were these massive productions with sponsorship or NFTS backing, and mine was this little 1K production we shot in Falmouth with very few resources. So there’s something heartening there. I met my agent at a BAFTA party and I was very focused on making sure I utilised that time.

One thing I would say helps in the early days is to pick a genre, as soon as I said I was a comedy guy, with only two comedy shorts to my name, it was much easier to package me up for pitches.