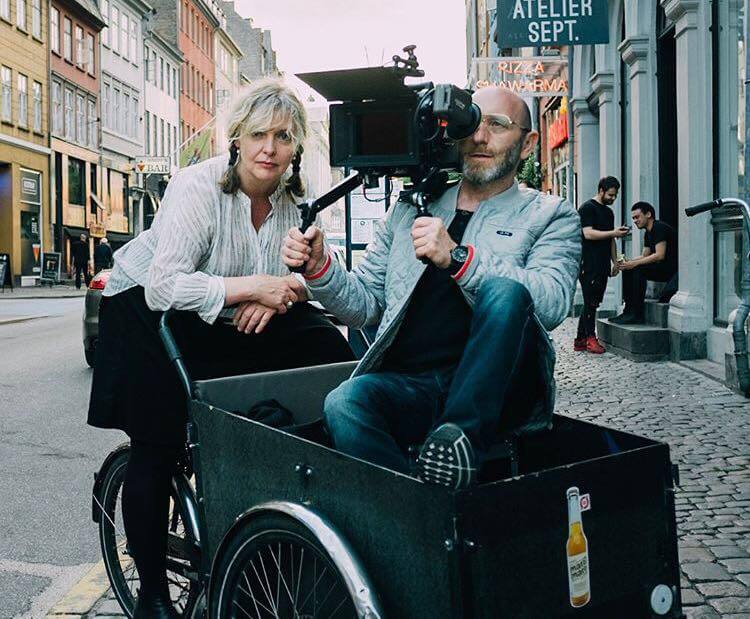 Danish film director Birgitte Stærmose is educated in the US, where she resided for 14 years. Her early award-winning shorts all screened at prestigious festivals (Sundance, New Directors/New Films, Berlin, Rotterdam) and earned her twice the EFA Best Short Film nomination, as well as awards at Berlin, Rotterdam, Melbourne IFF, Stockholm IFF, Dokufest and Danish Academy Award for Best Documentary for Out of Love.

Her debut feature Room 304 premiered internationally in the main competition at Karlovy Vary IFF, where it was awarded for its score. It was released in cinemas across the country. She is also the co-writer on the feature film The Idealist (dir. Christina Rosendahl).

In 2015 Stærmose directed three episodes of the Danish TV2 drama series Norskov airing in Denmark, Norway, Sweden, the UK, the Benelux countries and the US. Her second feature, Darling, a drama set in the Royal Danish Ballet written by Kim Fupz Aakeson and produced by Peter Ålbæk of Zentropa Productions, stars Danica Curcic, Gustaf Skarsgård and Ulrich Thomsen. It screened in Danish cinemas during the fall of 2017 and had its international world premiere at the BFI London Film Festival 2017.

Stærmose is the first block director on the Starz series The Spanish Princess and the Julian Fellowes Netflix Original series The English Game.

I grew up in the province in Denmark. I remember when I was about 16 and attended Gymnasium, we were presented with these cards that described the different jobs and type of education that would lead to them. They were in a box, and I leafed through them all and thought, there is nothing in here that really interests me! Then I read the card that described being a Film Director and I thought, this I can imagine. I think at the time I was looking for a dream for my future. After finishing Gymnasium I decided that I wanted to go to the school of journalism to become a TV journalist. At the time people often did BA in Cinema Studies as a sort of preparation for attending journalism school. I enrolled, and was also doing a lot of still photography at the same time. I got into the audio-visual production at University and often found myself in the editor’s chair. After I completed my BA, I thought I would do an MFA in either photography or filmmaking. I didn’t want to carry on with the people I had  gone to University with, so it suited me really well to follow my American husband, who was doing a PhD, to the US. I attended a course at Temple University in Philadelphia, in cinematography, and felt for the first time that I belonged. I think education is also a lot about ‘finding your people’. You have to find a group of people that you belong to and that mirror you in some way. It is so important also as you embark on your career. I think I always was on the way to somehow be in the arts and to tell stories. I do imagine it could have happened in other ways, but I can’t imagine not doing this.

After completing my MFA I had already had my first child. I was the first female student in the MFA program to get pregnant! It was the time of the Dogme movement in Denmark and Danish film was doing really well. I had by then lived in the US for 14 years, but I did not feel like an American. I also felt connected to a European type of filmmaking and couldn’t imagine myself in Hollywood. So I thought maybe I should return to Denmark and see what that would bring. I applied in Denmark, to make a short film, while I was still living in Philadelphia. My husband and I agreed that if I got funding we would  try moving back there, and if I did not, we would stay in the US. After a year and a half I got a short film funded through the Danish talent development scheme at the Danish Film Institute. I moved back with my now two children and husband. My youngest was just six weeks old and I did my first professional short film with him and my husband on set – breastfeeding during all breaks and having to nurse during the nights. We were shooting in the countryside in the Czech Republic and everyone on the crew got a really nasty stomach bug. So I was nursing, sick and doing my first short. After that shoot was completed I thought I could do anything.

I have felt as a female director that I had to work really hard for everything I have achieved. It seemed like I had to do everything twice to get the proper recognition for any given career step. I got lots of awards and festival recognition for my shorts, but it still took a long time to get to do my first feature. I became a really strong a confident director from this, but my output in the end, will be less than if I had gotten an earlier chance. I never really got a lucky break until much later in my career. I hope that is different now. I have however, after the me too movement, really benefitted and been able to start building an international career with lots of interesting opportunities.

I have always tried to keep working with actors between projects. I have taken lots of workshops with different mentors and been a part of actor collectives where we informally would do scene work – just to get lots of practice. This benefits me a lot today in my work. It can be difficult, as a director starting out, to build up the experience and the confidence with actors. I recommend finding informal ways of doing that. It can feel in the beginning like everyone on set always knows so much more about being on set than you do. And they do. I also like to teach occasionally. Having to explain what you do gives you a different perspective on your work – it is very healthy and helps to develop your vision and your craft. The other thing that has been completely crucial for me has been my close relationship to a few colleagues. I have a director colleague whom I can talk to about absolutely everything. When I feel stressed or stuck I can always call her. It is such a strength to have that space with someone who understands and who can guide.

In Denmark we don’t work with agents, so I did not get an agent till much later in my career and only for my international work. I built my success with festival awards and critical praise. I have always tried to have close creative relationships with producers that I respected and whom I felt supported by. I think my biggest survival strength is my arrogance. It can be good to not take everything in. People have a lot of opinions and you have to learn to trust your own intuition. At the end of the day your intuition is all you have. If you have a conviction that it is right, then you can manage a lot of difficult situations. As a director you have to take so many decisions that you cannot overthink them – you have to be able to make confident intuitive decisions in the blink of an eye. I am also not a pleaser. I am pleasant, but I always very truthfully try to state my opinion.