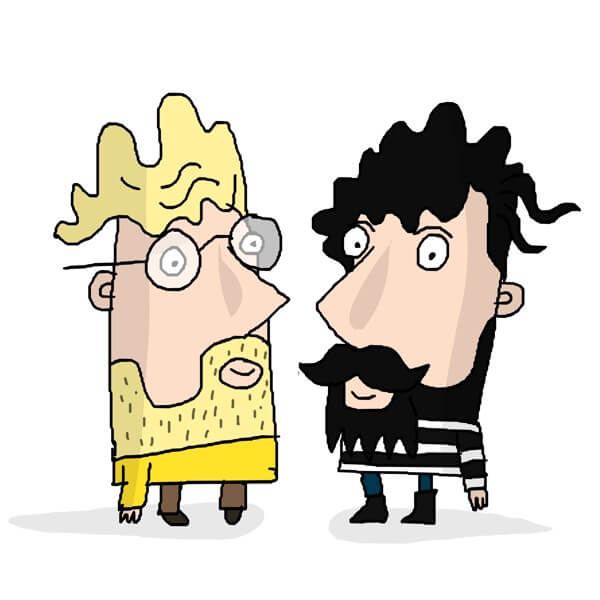 The Brothers McLeod are illustrator Greg McLeod and writer Myles McLeod. They are British filmmakers represented by Sheil Land Associates and specialising in illustration, writing and 2D animation. They have been nominated for two BAFTA Film Awards for Best British Short Animation.

In 2008 they produced Codswallop which was nominated for a BAFTA Award for Best Short Animation at the 62nd British Academy Film Awards. In 2011 they worked with the Royal Shakespeare Company to create a series of animations called Billy, featuring an animated version of Shakespeare and his pet pig Francis. The animations were commissioned as part of the reopening of the main theatre after a multimillion-pound restoration project.

In October they were nominated for another Children’s BAFTA Award for Quiff and Boot, made with BBC Learning, which they went on to win.

2013 saw Greg McLeod animating one second a day for the whole year in a short animated film called Simply 365. In 2019 The Brothers McLeod were nominated for Best British Short Animation at the BAFTA Film Awards for their short film Marfa.

As well as working together on projects, the brothers also work on individual projects. Greg has exhibited at a variety of illustration exhibitions, including as an award winner at two Association of Illustrators tours (Images 33, Images 35). Myles also writes and develops material for other production companies, predominantly for children’s television.

MYLES: When we started making films I don’t think we thought of ourselves as director, writer, animator… or any other label. We just wanted to tell stories and we worked together to make things happen. We just got on with it. We wrote stuff together, did the voices, wrote the music. Greg designed everything and did most of the animation, but I even mucked in and did lip synch in the first projects. Having said that, Greg had been inspired to become a filmmaker after watching some of David Lynch’s films. Before that, most of what we’d been exposed to were blockbusters. Seeing those films opened a door to other possibilities. I think you can still see that influence in a lot of our short films and Greg’s independent work.

I had an inkling that I wanted to be an author from about the age of 16, but I wasn’t one of those people who was born thinking ‘hey, I know what my destiny is, it’s to be a writer and director’. I studied sciences to begin with and tried my hand at science journalism before realising it was storytelling that I was really interested in.

MYLES: Neither of us studied formally as a director, though we did both study media at some point (I did an MA in Screenwriting in Bournemouth). Our career really started online. We starting making films and publishing them on our website and then when YouTube came along we used that as a platform.

To begin with our films weren’t great, but we didn’t stop making stuff and we improved. By 2005/2006 we started to get commissions from folks like the BBC and Aardman. For us it was very much about teaching ourselves and trying new things out each time. We also made some stuff early on for places like Atomfilms that liked sick humour. We tried to fit into that but realised that wasn’t our sensibility. We learned from that. We realised there’s no meaning in making films that don’t come from your own being. Those films have no heart.

MYLES: Around the time we made The Moonbird, which was a Film Council funded film, we got a little big for our own boots. We’d been nominated for a BAFTA Short Animation award the year before and were starting to do well commercially. I think we really thought we were the bee’s knees. In fact, we still had a lot to learn as was made clear by The Moonbird itself. It’s a charming film, but way too long, with a bland protagonist. As a filmmaker you are always learning and it’s easy to make basic mistakes in storytelling if you think you’re brilliant. Stay humble.

MYLES: I think there are two sides to developing your craft. They are “Make” and “Take”. Make films, make books, make poems, make illustrations, make ideas. You get better by doing and making and trying. But sometimes you need to fill up on inspiration too. That doesn’t mean you should just watch films to be a filmmaker. Of course you should, but also… read books and screenplays, listen to audiobooks, watch plays, listen to music, watch interviews with people you admire, fill up with inspiration from other places.

It’s also important to become aware of your own emotional state. What makes you happy, angry, sad, intrigued – notice those things. They can help you make more emotionally intelligent work.

In terms of getting experience… I always wanted to make my own shows, series and write my own books. For that reason, I started writing on other people’s animated TV shows back in 2006. The experience I’ve gained there has improved my own writing, but also makes it more likely I will be trusted by producers to helm my own original work.

MYLES: Our first big break came around 2005 after we made an animation about a ninja that went viral. It came to the attention of Aardman Animations and they recruited us as commercials directors. We also used it as part of a pitch to CBBC, which then led to us working on a show for them called Pedro and Frankensheep. This was really just the culmination of about five or six years of work. We had just kept making stuff in between our regular day jobs until we reached a level of professionalism that enabled us to start a new company. Really it just came down to persistence.