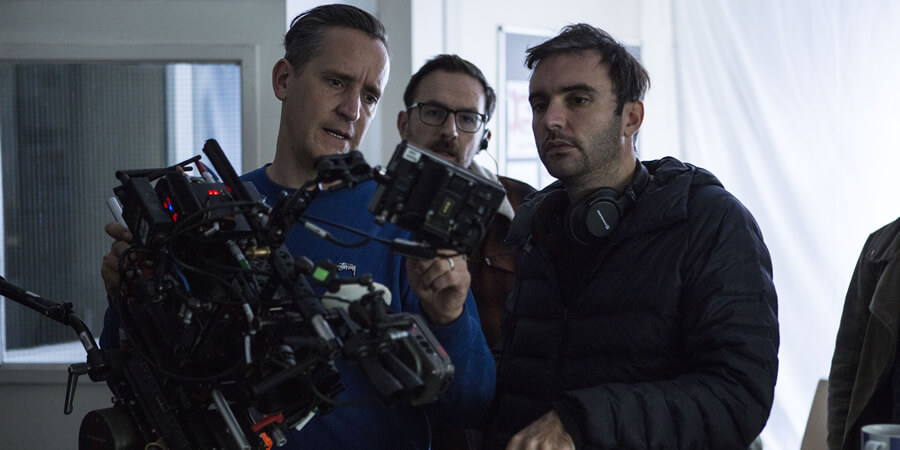 Hello. I’m Chris, and I am a director. I direct films, TV, music videos, and I have a podcast called Homo Sapiens which is the LGBTQ+ answers to BBC Radio 4’s Woman’s Hour.

My work has been widely acclaimed (I didn’t write that bit) by the likes of The Guardian, The Times, The New York Times, Vogue, Dazed and The Evening Standard. I mentor young filmmakers through the BFI Young Film Academy.

I am from London and my dad was a fashion photographer and my mum was a stylist. So it was an arty household. I had seen first hand what creative jobs mean – funny hours – inconsistent income. But also a lot of fun.

I originally wanted to be the person who put music on films – but when I asked around, people told me that was the director’s job so I thought, fine, I’ll have to work out how to do it all then!

Then I fell in love with music videos and became obsessed with the idea of creating the visuals for music / songs.

I started making (terrible) things with any camcorder I could get my hands on. We used to make fake You’ve Been Framed videos (I wouldn’t advise doing this) but even then I was fascinated about how to make fake stuff look as real and natural as possible.

I cannot state enough that it’s all about just making something, anything, and doing it on repeat. Directing is not a dark art or magic, it’s just, like so many things, about practice.

I studied TV and Film at Bournemouth University – it was a great course, but I had just come out, and being gay and 19 in Bournemouth, I didn’t have a lot of dating options. So I spent a lot of time in London and worked as an office assistant at a commercials production company whenever I could – every holiday and weeks off. I made sure I was the most helpful runner they had. When I arrived everyone used to go out and get their own lunches, the building was a mess. I started getting everyone’s lunches, tidying up the place. And soon they loved me, and started asking what I wanted to do. I was SO nervous to say director – that’s really common and if you wanna be a director – don’t be afraid to say it. But because I was helpful people included me more. They actually asked me to leave university and work for them, but I decided to stay in school.

I shadowed lots of commercial directors when I was a runner. I think it’s quite hard to do as you see the world they live in, but i’m not sure how much you learn. I then did research for directors and learned a lot because you have a reason to talk to them about what they’re trying to achieve and how. I loved that.

I worked as a runner all through university to pay for it. After Uni I got an internship at MTV and making stuff fell by the wayside for a year. Then after a year I met up with my friend from uni – Sarah Chatfield – and said, “How the hell are we gonna become directors?” We decided we would do it together as a duo. And so we met up every weekend, without fail, and planned out what we were gonna do, and contacted bands on Myspace to say, “Hey can we make you a video?”

Set backs were – no one replied to our myspace messages and – the general question we asked ourselves all the time was how the fuck do you become a director?

There is no ladder, you either are one or you aren’t. Also it seemed impossible to earn a living and become a director. I worked every hour God sent just to make my rent payments. How would I ever have the money to pay for a short film? and take time off to make it? That spun me out on a daily basis.

If I can give any advice, it’s don’t get a job that takes up all day, every day, when you are starting out. Waitering (pre pandemic…) is a great job cos you can do it in the evenings, and that can leave your days clear to pursue your other stuff. It’s hard, but worth considering.

Directing is all about trusting what you think, and not thinking that someone, somewhere else, e.g. Martin Scorsese, would know how to do it better. I like to use the analogy of speaking. When I speak I am just fine that I sound like me, I don’t wish I sounded like various other people. But when it came to directing I was constantly worried I wasn’t doing it as well as other people I thought were more talented than me. Plus people can be a bit pretentious about making TV / films and that makes me worry that people will avoid it, because they feel there is some secret they don’t know. There is no secret.

Directors come in so many forms, and I don’t actually watch that many films. I read a great interview with Anton Corbijn who said, “I’m not a cineaste”. And that was such a huge relief for me. I’ve realised I’m basically interested in making moments on film feel like there wasn’t a director. Like it just happened and we caught it documentary style. I relate to a lot of female filmmakers who I have heard say that more than male directors. As a result maybe I’m a line producer’s dream cos I never want a crane or anything, just handheld camera, small crews. But that’s me. Other directors love the technical side. Others only like talking to the actors. Crucially, as director you need to be across it all, but don’t feel bad if an element doesn’t totally excite you – by doing it you will find your way in. And hugely importantly, a MASSIVE part of directing is saying that you don’t understand or know how to do something. People talk to you like you’re an expert on everything and the main problem I experienced in my early career was by being too shy to say I felt out of my depth, or didn’t understand, or couldn’t make a decision. Always, always say out loud if you can’t decide and you will experience the sheer joy of how lovely people are, when they know you need help. But at the same time, remember you are the leader, and don’t shy away from that. So spend the time explaining to people what you want to make, in immense detail. Because it may seem clear to you, because it’s in your head, but people are not mind readers.

My best mate at university, Sarah Chatfield, got a job working as a PA to a commissioner who commissioned music videos. One day a video came in that had NO budget, and Sarah managed to pitch me and her directing it as a duo. I have never been so scared in my life. It was for the The Cribs and their song You’re Gonna Lose Us.

We didn’t totally mess it up and that got us an agent. The reason we got that gig, was that they knew in the building that we had been meeting every weekend to try and work out how to direct, messaging bands on myspace, while also holding down our day jobs and being good at them. People saw we were hard working and reliable and that meant that offering us the chance was less risk for them.