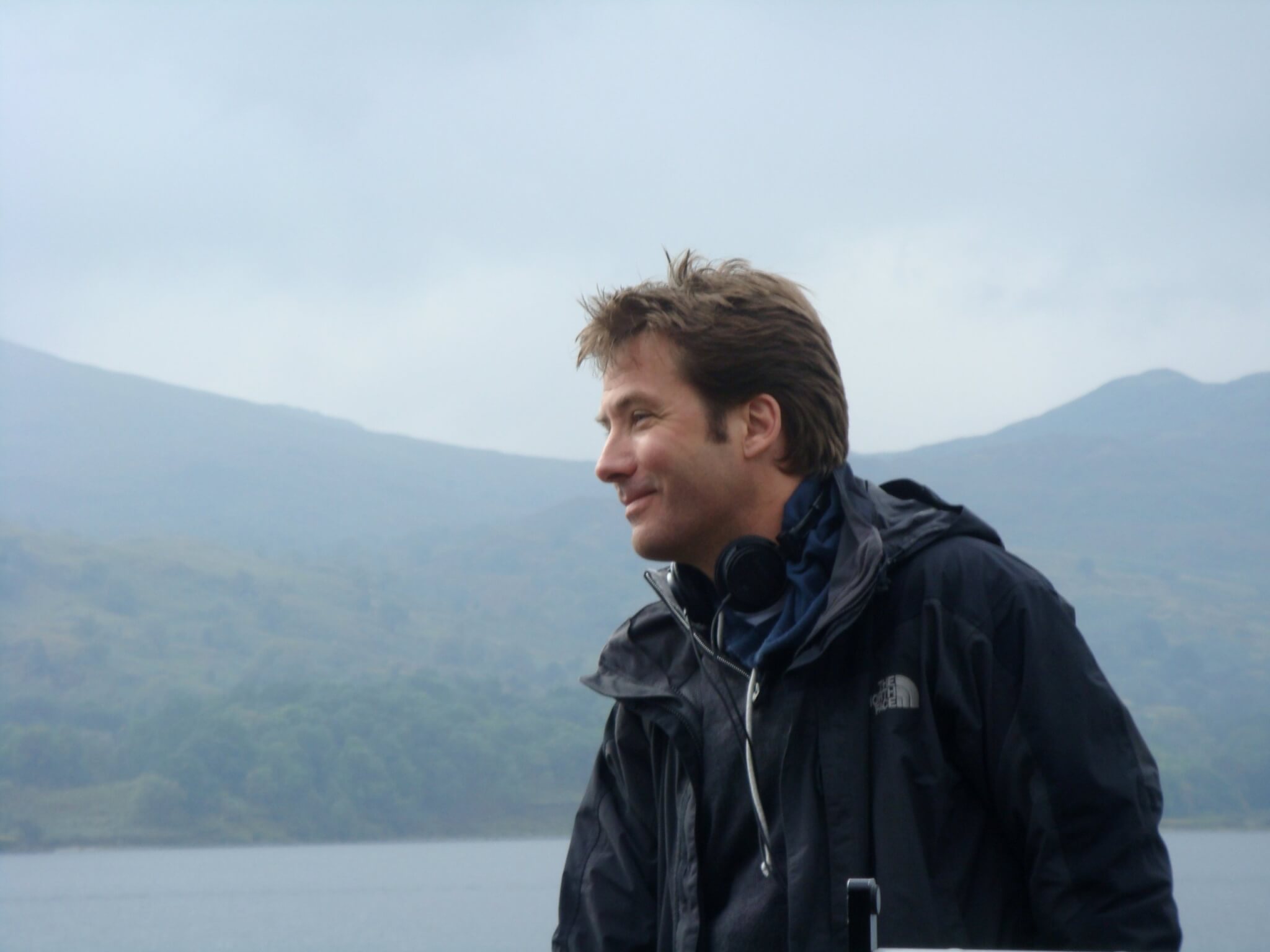 James Hawes is a British television director. He has worked in British television drama since the mid-1990s, and has also produced documentaries for British and American television networks. His work has ranged across high-end period pieces and prime-time adventure drama, including the re-launch of Doctor Who and Enid, a biopic starring Helena Bonham Carter about the celebrated children’s author Enid Blyton, which won Hawes a BAFTA nomination as Best Director at the 2010 ceremony.

It was while doing a play at secondary school in Cornwall. I just fell in love with the process, the atmosphere of building a show. I had one of those utterly brilliant and inspirational teachers. His real name was Watson, but we called him “God”. He introduced me to drama and encouraged me all the way. My parents were horrified. When I told them I wanted to enter the industry, I might as well told them I was running away to join the circus. I had been raised to do sensible, establishment things: become an army officer and then a lawyer. No one in my family had done anything ‘arty’ – that said, I do have a distant great-uncle who translated and illustrated Victorian pornography. He ended up with a knighthood!

Directing just wasn’t on the map of potential professions. I have yet to hear of anyone who had directing suggested by their school careers advisor. I flirted with that army career and did a course for ‘potential officers’ at the Royal School of Artillery. That did not last long! I went on to read law at university. The deal I made with my parents was I would go to a top law university, but one that had great traditions and facilities for drama. When I later decided against a career in the law, my father told me I would no longer be supported by the family. And he did not speak to me for six months.

I spent most of my time at uni acting and directing shows. I was lucky enough to be surrounded by some amazing people, people who are now actors, agents, writers, directors and producers in the industry. It fuelled a fabulous, risk-taking creative atmosphere. In my third year, I adapted a series of Shakespeare plays into a single show called ‘Harry’. We performed it in the ruins of Kenilworth castle. Our production manager spotted a young Ken Branagh in the audience, and a producer from the BBC. The BBC came and filmed scenes from the play as inserts in an historical documentary series. There would be consequences…

I could not really afford to go to film school. I struggled to find equipment to make short films, so I concentrated on my theatre route; working with actors, exploring stories. But the need to keep earning distracted me from a pure drama path.  One of my ‘breaks’ (see below) became arguably one of my setbacks. I spent eight years at the BBC, working on factual programming of all kinds, eventually making documentaries and drama docs. I certainly wasn’t any closer to making movies, but in fact it was a fabulous training, full of life-defining adventures; filming all over the world, in rain forests, war zones, slums and palaces. And I did collide with people who were frankly discouraging, including, while I was in BBC Current Affairs, the fabulous Esther Rantzen, who told me I would ‘never be a director’!

I never made ‘classic’ short films. Instead I made broadcast films at the BBC and worked constantly to convince my bosses that their show would benefit from a drama element in them. I basically persuaded the BBC to construct an informal, ‘on-the-job’ training scheme for me. It sort of worked.

I think developing your voice is something that happens throughout your film-making career; evolving with every project you undertake. You need to listen to your instincts, make the films you feel for – about stories that make you laugh, make you cry or make you really, really angry. Play to your strengths. Don’t try and be the director who can make everything. I made that mistake for a while and it cost me. Know how people perceive you and develop that ‘role’. Test the boundaries, but don’t fight who you are. Find collaborators who inspire you. I have worked with three particular cinematographers who have taught me to see things with fresh and confident eyes, to concentrate on every frame, never to settle for ‘okay’. And consume. Watch everything you can. Watch it with the sound on and the sound off. Read the scripts and then watch them again. Study the influences of the people whose work you admire. Ask questions. Then ask some more. Learn what others have done and use it to inform your own choices. It’s like designing your own course of film studies.

There were two breaks in my career. Perhaps four!

First one – into the industry in any shape: remember that Shakespeare adaptation? Well I nagged the producer of the documentary series and, a few months later, he called me and said there was a two-week contract available in a BBC department called Documentary Features. I was to be a trainee assistant researcher on a TV review show called Did You See…?, presented by legendary broadcaster, Ludovic Kennedy. The ‘pay’ amounted to reimbursement of my tube fare to White City and a sarnie in the BBC canteen. I took it. And I developed a run of short, unpaid contracts in BBC Factual and Current Affairs departments. It was an amazing way to learn story-telling rigour. I paid my rent with a job delivering hire cars until the BBC started paying me properly. And in my moonlight hours, I set up The Young Shakespeare Company, inspired by our success with that play. Each summer I would take two shows touring in England and the US. I was utterly naïve and inexperienced. But we had a 50% hit rate and the learning experience was invaluable: how to work with actors, how to lead a team, how to accept failure.

And that’s what gives you the edge: making opportunities for yourself; seeing a way to tell a story and grabbing it. Put in the hours and become an entrepreneur. Directors have to be leaders. You need to be able to champion your project, your show, your film. You have to have a fire in you to get it made. Without that you will never summon a team; the team you need to have your story told. And be brave enough to collect a team who challenge you, who will ask you difficult questions. That is the only way to learn. Nobody ever made anything interesting by surrounding themselves with sycophants.

Break number two came some years into my time at the BBC. I persuaded an agent to take me on, based on an hour-long docu-drama I had made. Having directed all that theatre and proved my experience working with actors really helped. The agent in turn talked a producer at The Bill into giving me a break into drama. It went well. And I decided to embrace the world of continuing drama. Telling a story on a budget, leading a cast and crew on a demanding TV schedule – these are golden film-making qualifications. They give producers confidence. I know some directors refuse to dirty their filmography with soaps and returning series. Well, a lot of those directors have never made the ‘big’ break as a result, and many directors who learned their craft on soaps went on to win BAFTAs and Oscars. Don’t be grand. Mix championing your own projects with gathering entry-level experience – whether film or fringe theatre or gaming or whatever. Just practice telling stories.

Third and definitive ‘break’ was landing a pair of episodes in the first series of the revived Doctor Who. My then agent warned me against taking the gig; he said it had a ‘bad smell’ about it. Not for the last time, I followed my instinct, took a risk, ignored my agent – and was very grateful I did. It does not always work. I have turned down some shows that went on to be hits, but in the end you have to trust the instinct of that moment.

Every creative career is the story of a series of ‘breaks’. One leading writer/producer in Hollywood told me that a successful career is built on the times you say ‘no’. I sort of believe him.

And it doesn’t stop being challenging, not if you are any good. I might spend days preparing a pitch for a project – and then have to cope with disappointment. I develop ideas that never get made. Or at least, not yet. But with each pitch, each treatment, I learn more. There will be creative conversations. Perhaps I will meet people, new producer contacts or collaborators. It is never wasted energy.

Every director I know has found their own way. There is no golden ticket, no map to the perfect career path. But, in a world of iPhones and lap-top post-production, there is no excuse not to just start making movies. Be your own producer. Risk it. The most empowering thing about a freelance, creative career is that you have control. It may not always feel like it, but you have the opportunity to take your idea out there and make it real. Of course it takes hard work and talent and a little luck, but it is always possible. Just dream it.