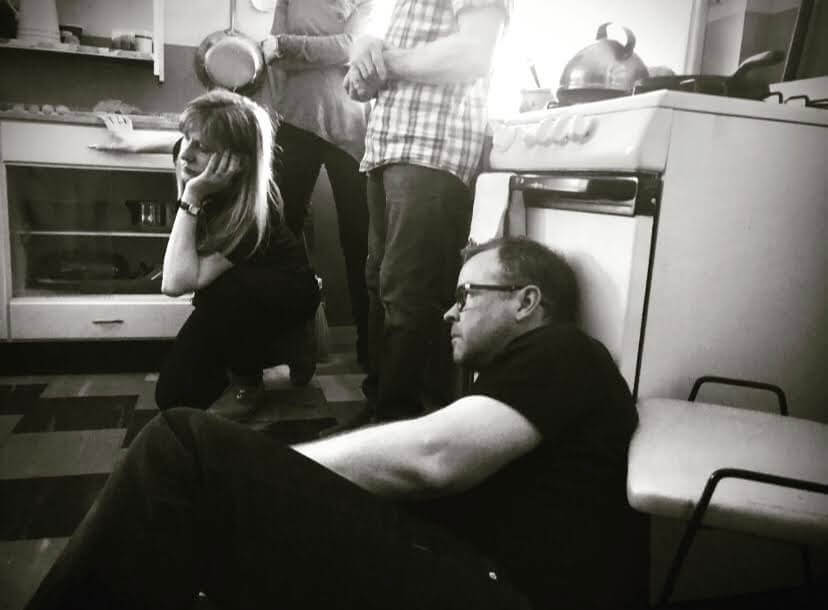 Jill Robertson is a BAFTA nominated film and television director.  Her most recent credits are Red Election for NENT/Viaplay/A&E, Impulse for Youtube/Hypnotic/UCP. Other work includes Amazon Sci-Fi drama The Feed, Humans for Kudos/C4/AMC, Harlots for Monumental/HULU, Brief Encounters (CPL) and Grantchester (Kudos) for ITV and Last Tango In Halifax for Red/BBC. A former professional dancer and drama teacher she trained at the NFTS and began her career working in script development and production on films including Trainspotting, A Life Less Ordinary and Saving Grace.

I grew up just North of Watford and come from a very ordinary background. My relatives are mostly teachers. We were a second family for my father, coming pretty late in his life. I spent a lot of my childhood watching films with him and was fascinated by his description of first seeing a Charlie Chaplin film and the magical escapism of visits to the cinema from his poverty stricken childhood. I realise now his life spanned much of the history of film and was marked by his favourite films throughout the decades. He passed on to me his love of musicals, Westerns and sci-fi ‐ in fact any genre with a good story and great characters. He also had an 8mm camera with which he documented our holidays and family visits, rarely appearing himself, and I remember always being massively excited when the films arrived back from the Kodak lab and the projector came out of the loft.

One of my most exciting Christmas presents was a miniature projector (basically a glorified torch) through which I could project slides of cartoons onto my bedroom door and charge my sisters entrance to watch them, issuing home-made tickets. It was a long time till I had any idea of what a director was but I was always excited by the fictional worlds into which I could escape when I was watching films and hours of TV.

I started my career as a dancer, in fact a showgirl in a Moulin Rouge-esque spectacular in Madrid. It was the one of the most extraordinary years of my life. However, I knew dancing was a short-lived career and was still thinking about movies, TV and finding a way to tell stories. Inching closer, I then qualified as a drama teacher, encouraged by my parents to get a ‘proper job with a good pension’. Whilst teaching I had the opportunity to help a friend’s brother with the night shoots for a short film he was making. I taught drama during the day and then worked on the film all night, snatching a couple of hours sleep on the staffroom sofa before the school day began. I was pretty unhappy teaching, it just wasn’t for me. I could relate to the kids and loved our drama sessions but I didn’t quite fit in overall. Ten minutes after I walked onto set of the short film, I experienced the most powerful feeling of familiarity with the crew and actors. I knew I had found my tribe.

I was always driven by a desire to tell stories to an audience. To move, thrill and entertain them. To give the audience an opportunity to escape into another world just as I did. It was a very instinctive feeling. I had no idea how it worked or how I was going to do it, just that it was something I increasingly felt I had to find a way to do.

I had a memorable discussion with my school career advisor aged 17, when I expressed a desire to go to college to study film and TV. It was deemed unrealistic and suggested that perhaps I should study English. There were very few film courses around at the time so that is what I did. I am actually very grateful for that advice as it gave me a fantastic grounding for a career as a director ‐ reading and analysing books, plays and poetry has directly fed into my understanding and interpretation of scripts and stories.

After year of teaching I went to the NFTS as a full-time producing student following a period of volunteering on graduation films doing everything from driving minibuses to searching for last minute props in the middle of the night. I had applied for producing as I was working in the production office and it seemed a natural progression. All the female role models I knew in the industry at that time were also producers. Even though I got to direct a couple of short films there I stayed in producing and production for quite a while before I started directing. Everything I learnt about filmmaking during this period has been very informative and helpful in my directing career and it’s been so beneficial to be able to see things from a producer’s point of view.

I have been fortunate and don’t feel I have had many obstacles, although there were periods of financial struggle when I was trying to make my first short film. The only real obstacle I experienced in developing my career as a director was my gender. I am thrilled that this has changed a lot more recently.

After film school I was lucky enough to get a job as an assistant, working for the coolest Producer in town, Andrew Macdonald, who at the time was developing a low-budget film called Trainspotting. Shallow Grave had just been released and the opportunity to work with Andrew, Danny Boyle and John Hodge over the next couple of years was fantastic and has been the greatest influence on my work. It was an extraordinary time where everyone from Oasis to Sean Connery would walk through the office door. I also was a runner on a Ken Loach film prior to this and he was kind enough to let me watch him rehearsing. Coupled with my drama training and performance experience this very much influenced the way I work with actors. I subsequently produced a number of short films with first time directors and started to think about directing. I found a short script I really liked and when I couldn’t find a director, decided to do it myself.

I got my first agent after he came to a screening of my short film. I think my experience with Andrew and Danny and my producing CV certainly helped, and that I was already planning my next short film. Through him I got my first break in TV directing Hollyoaks, which was another big and beneficial learning experience where I also got the opportunity to direct Brookside and most excitingly, Grange Hill. This was a show I was obsessed with as a kid and it felt really extraordinary to be actually making it. The experience peaked when I got interviewed on Blue Peter and was given a badge, which is still a prized possession. Despite the pandemic, I still feel that this is the most exciting, fertile time I can remember for filmmakers with the ever expanding number of formats, platforms and opportunities we can utilise to tell our stories.