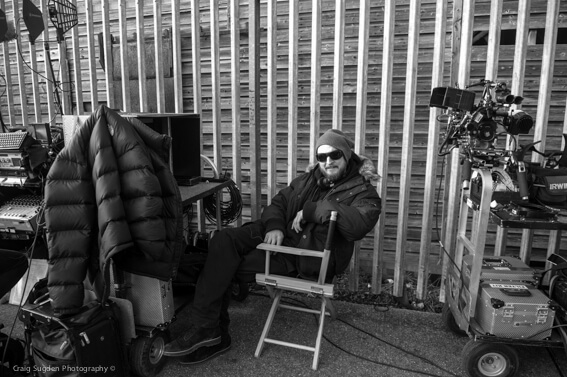 Kieron is a filmmaker from London. Since 2011, he has directed and edited a plethora of successful series including nine episodes of Fortitude for Sky Atlantic which started Dennis Quaid, and The Mimic for Channel 4 comedy.

Kieron also directed four episodes of BBC One’s Ripper Street, which has been a hit in America. He set up a high-profile comedy/drama series for Channel 4 called Not Safe For Work. In 2017 Kieron directed The Silkworm, one of JK Rowling’s hugely successful Strike novels for the BBC and HBO.

In 2012 Kieron wrote and directed the feature film Piggy. The film was released in cinemas by Metrodome and became one of Sky Movies’ most popular On Demand titles in 2013.

He is currently working on Intergalactic, a fast-paced female led action adventure set in space in the future.  He is lead director and executive producer of the 10-part series. He is also working on the 50 Cent origins show Kanan Rising for Starz in the US. Kieron is signed to 42 in the UK and CAA in America.

I was a musician first but I was always artistic. I came from a world that didn’t recognise art as a way to make money. I came from just outside London, so we weren’t quite working class but were certainly not middle class, but even more we certainly weren’t artists. I always loved movies, I was obsessed. I had all my videos categorised and listed, and I still keep lists of what I’ve watched to this day. It was the late ‘80s so it was films like Rambo, The Running Man, Rocky, The Lost Boys, but also Taxi Driver. I loved it but it didn’t come from the place in my head that thought, you could make films too.

Later, I went to a performing arts college where I learnt about theatre and acting. I became obsessed with Arthur Miller, Pinter and acting. I knew I didn’t want to be an actor but I loved the art of acting and everything around it. I painted, drew, wrote, took photos, and then I played music. One day, on my 19th birthday, I bought the book Scorsese on Scorsese. When reading it I realised that my skillset and passion for acting and the arts actually applied to filmmaking; directing specifically. I was working as a runner for a theatre company at the time, when I set my sights on the London Film School (LFS). I had no contacts in film other than some actors, so it felt like something I could do to work toward becoming a director. I managed to get into LFS in 2001. Then the real fight started.

When I got into London Film School I was hungry. I ended up watching EVERYTHING I possibly could; between three and six films a day. Jean-Luc Godard, Rainer Werner Fassbinder, Martin Scorsese, Francis Ford Coppola, Micheal Mann, Paul Thomas Anderson, Federico Fellini, Sidney Lumet; I could go on and on with this enthusiasm. I knew more than everyone else: the origins of cinema. American, English, Spanish, whatever. I knew more. I’d watched more films. Read more books about film. This is the world that filmmaking exists in. If you want to be in this, you must be the most hungry, the most watched, the most forceful, the most creative, and the first to the request. I can’t outline that enough.

One of my most respected teachers, Allen Bernstein, said to me that it will take four years post film school to get any where. It took me six years before I edited a feature, seven years before I directed a feature and eight years for my career to take off. There wasn’t a second I didn’t believe it wouldn’t happen because all I’ve ever wanted to do is direct.

My first film didn’t go down as I’d wanted. It did good for me, got me an agent but didn’t light up Cannes as I hoped. The reality wasn’t the same shape as the dream, so to me I’d failed. I could have folded, but fuck that. Fuck the industry. In directing you learn on the job. You sink or you don’t. It’s not for the faint hearted. When I see work that’s not great I still have ultimate respect for the person that’s at the helm. Now I direct as if it’s war. I put my life on the line. That sounds ridiculous and dramatic until you’ve done it; you go in and direct five hours of high-end content with the money and the pressure, and the limitations, and see how it feels. It’s the greatest buzz and the most physical and mental test there is. It will set you free and destroy you in equal measures.

I have fought and fought, for every inch of my industry territory. It’s still unsure footing. I have to step back to watch myself progress to understand the narrative. Inside, the fight is all you can see. We are in a time of high-end TV and great content, big TV and directing being the same on all platforms. What that means is that Fortitude sits next to Mindhunter, and Boardwalk Empire, so be fucking prepared because you’re up against the best in a way that you weren’t before.

Know your craft, know everything. Be the fastest, the most professional, the most curious and the biggest rebel, but at the same time be the kindest and most understanding person you can be. Be truthful because you’ll be found out if you’re not. Directors should be measured lunatics. It’s gentle brutality. What inspires me is the challenge and the art. You are a storyteller, something so important to the way people view and perceive life. My life is directing. It’s my therapy and it’s given the greatest things that have happened in my life by far. I’ve flown around the world, worked with the most interesting people, never had the same day twice, made money, and satisfied a love of creativity that is unbound. Filmmaking is the greatest job in the world, directing even more.

I decided, for wrong or right, that I’d never go on a set unless I was directing. So the first time I saw a call sheet was on the first day of my first feature. I struggled to get money to make shorts. I wasn’t in the UK inner circle so I wasn’t eligible for some of the funding that was available. Early after film school, I did go on a set and told the focus puller what to do and the director was furious at me. Rightfully so. So I stayed away.

I started editing and realised how related to directing it was. I started camera operating and saw the rhythm of the movement to directing, and realised how interconnected it all is. It struck me that if I could do everything (editing, camera, producing), then I could command the work, be a master of the craft. I went on to edit, learning directing through that. For every cut I made, I could see which shots worked together and how to craft performances on the floor that translate in the edit.

I got my break through an actor I know, and then a comedian I know. I edited a short film for a friend that lead to editing a movie. Then they asked if I had a script and I wrote one in a week, and then directed it – Piggy. At the same time I was working at a comedy company developing talent and I directed a short sketch that led to two series that I co-created, directed and edited for Channel 4 – The Mimic. You can have a door open but that’s not enough. When that door opened I smashed it down. Really. I haven’t stopped with that level of aggression since. What gives me the edge over other filmmakers is I gave myself no other choice. David Mamet said, “If you have something to fall back on, you’ll fall back on it.” I couldn’t agree more.