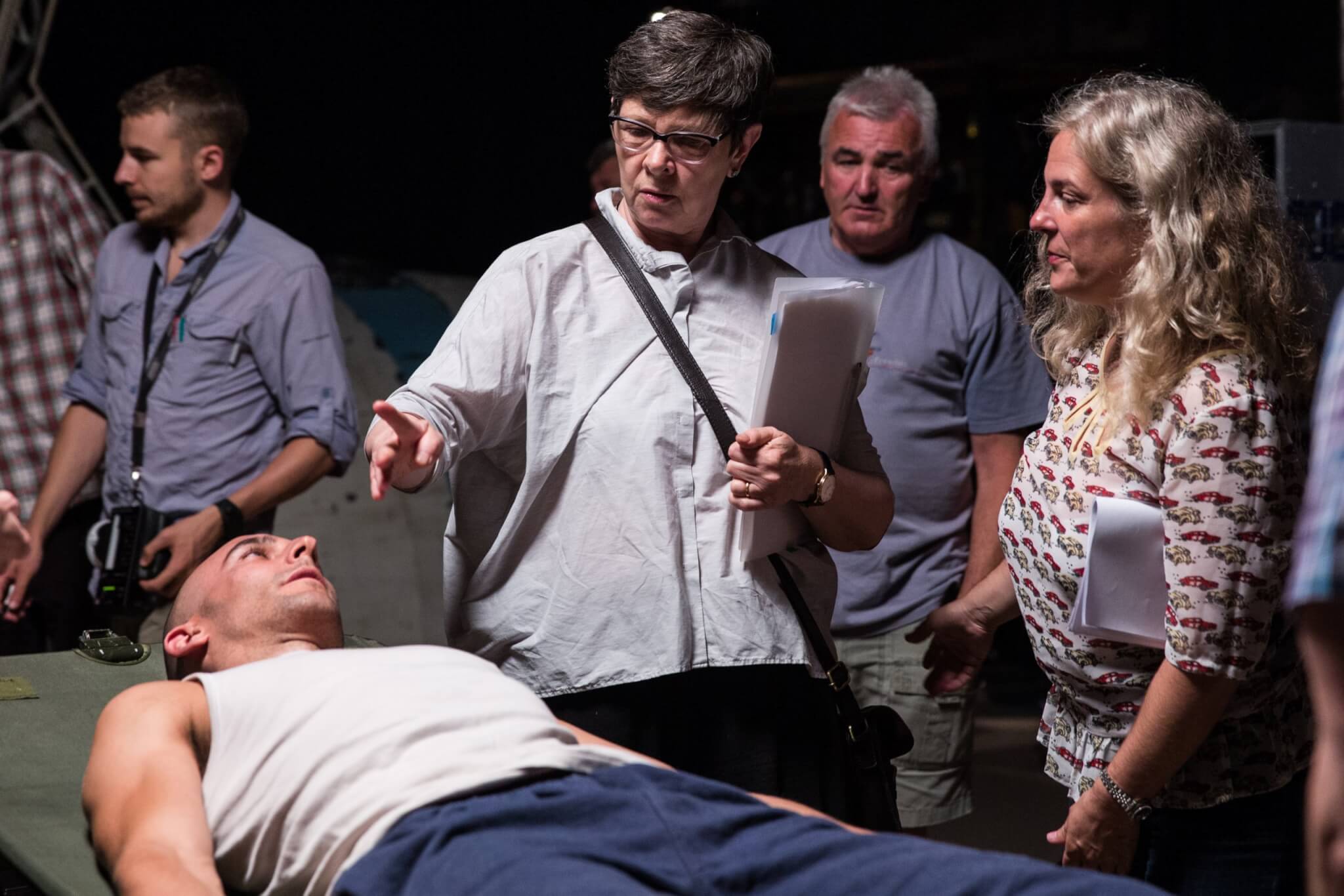 Welsh born Lesley Manning started making films at Bristol Art College where she graduated with 1st Class Honours. She trained at the National Film and Television School as a director and graduated to work on films and serials at the BBC. One of which was the cult hit Ghostwatch, the highest rated single drama for 48 years – BBC Screen One film strand and named by Channel 4 as the most controversial TV drama.

Lesley directed My Sister Wife BBC Screen Two film strand and won CRE best drama, Best Asian Film Award and was screened at Dinard and Brussels film festivals. 2011 Leila is the first feature Lesley has written as well as directed – and was a finalist at Austin Festival, winning Best Actress at London Independent FF and Audience and Jury award for best narrative at United Festival.

When I was 10 or 11, at a time of life when grown ups continually ask, “What do you want to be when you grow up?” I remember telling my mother, I don’t know whether I want to be a priest or a belly dancer. Now I know looking back that directing encompasses those two ambitions for sure.

The arrogance of thinking you have the moral high ground, wanting to tell people this, mixed with flamboyance and showing off? Something like that!

I went to art college because I could draw. I was the kid in the class who could draw. So without getting any further with the priesthood or belly dancing, I soon realised I had found my natural habitat. I was a fish in water. It was here that my best friend and I found a wind-up Bolex in a cupboard. Thrilled and with no tuition whatsoever, we both started to make films. I remember standing in a room surrounded by celluloid and mag track without much of a clue – other than this is what I want to do.

So after making animations and documentaries in the most haphazard way at an art college with no filmmaking department, I graduated and started to look for film work.

Pre mobile phone era and still without a clue, I phoned the entire yellow pages listing which started with film. Once I had reached listing 56, I got a positive reaction, “Yes, love to see you, come for an interview”.  Ecstatic, I took the train from Bristol (where I had studied art) to London. I found myself somewhere on the outskirts of London, a shabby door, leading to above a shop, greeted by an overweight man whose hands were covered in heavy statement gold, a gold necklace shown off through an open shirt and I was ushered into a pokey room for my interview. No one else was present. After a few minutes of chit chat, it became burningly obvious. “So do you want to be working in front of the camera or behind?” as we both looked at each other in deep confusion. Yes, he was a porn film maker. Exit as fast as possible.

My next film encounter was to rubber number Ken Loach’s rushes for his film Black Jack. He was cutting in a Bristol basement – I reverently would hand his rushes back to him in my white coat, my hands covered in white solution.

As often happens in life, I was offered three temporary jobs at once – and not wanting to be left without – I decided to take all three. I worked all day and then all night, but only lasted a fortnight. Luckily one was in the cutting rooms at the BBC and it stuck for a couple of years.

Although I knew I wanted to direct, I decided I wanted to learn to edit. Editing is the hub of the process as far as I was concerned. I quickly learnt it could take me my entire lifetime to “work my way up” to being a director from editing.

NFTS! This was where I needed to go. I made a film, bribed the local BBC news film baths to develop the film with a bottle of whiskey, and applied to NFTS. I felt fantastically privileged to get a place – one of six women in the entire school of 75 (at the time) honoured to have been interviewed by Tony Scott.

I graduated from NFTS having directed two films. But continued to edit for a living. I loved editing.

My light bulb moment was when I was editing for an NFTS colleague who casually in the cutting room came out with, “You should be directing”. My world crashed and I felt ill with myself. I stopped editing and applied to everyone and everything I could find.  Finally, after three months, I got a break for first time directors at Thames TV. A documentary I brought to them called Love for Lindy, about a group of street, self taught, lindy hop dancers.

From there I went on to drama and had a fantastic 10 years, and after directing the 2nd BBC film…..bang came the glass ceiling! That’s another story.

NFTS was a godsend. To make films, make mistakes, be able to make another film, was a privilege especially as this was in the days of 16 mm film. In other words impossible to make a film without the support of the NFTS. Making mistakes was the best lesson for me.

The other school of filmmaking for me was TV. My first drama was for the extraordinary producer Caroline Oulton who positively wanted to break every mould of TV storytelling.

Caroline Oulton made me an offer. She offered me (a woman director) at the request of the female writer, my first gig for drama.

Interestingly my agent at the time (not my present agent…) was pushing for a male client of hers, so I was competing against my own agent!

Making TV for Caroline was an wonderful period of filmmaking – we were all young, motived, keen as mustard and a little bit wayward. We would be up all night, trying to improve the scripts for production. This is how I started to learn the difference between drama that works and drama that doesn’t.  About the spine of a drama that keeps the audience on the edge of their settees.

And as an aside (to all those women directors coming up) Caroline offered me a three-part thriller, and I confessed I was 10 weeks pregnant, but would love to do it. After some discussions, the word came down from the execs, “Fuck it – let her do it”.

I took on a nine-week shoot, night shoots etc. My first AD and I discussed every week’s shot list (in case I keeled over – I didn’t).

Two weeks after shooting was completed, I had a caesarean (he was breech – I didn’t book it) – the production team were thrilled, because they could put it up on the schedule board. Two weeks later I was in Ealing cutting rooms, heaving the pram up 4 flights,  with the help of the assistant.

My son was 3 months old when I finished the three-parter. I loved every minute of it.