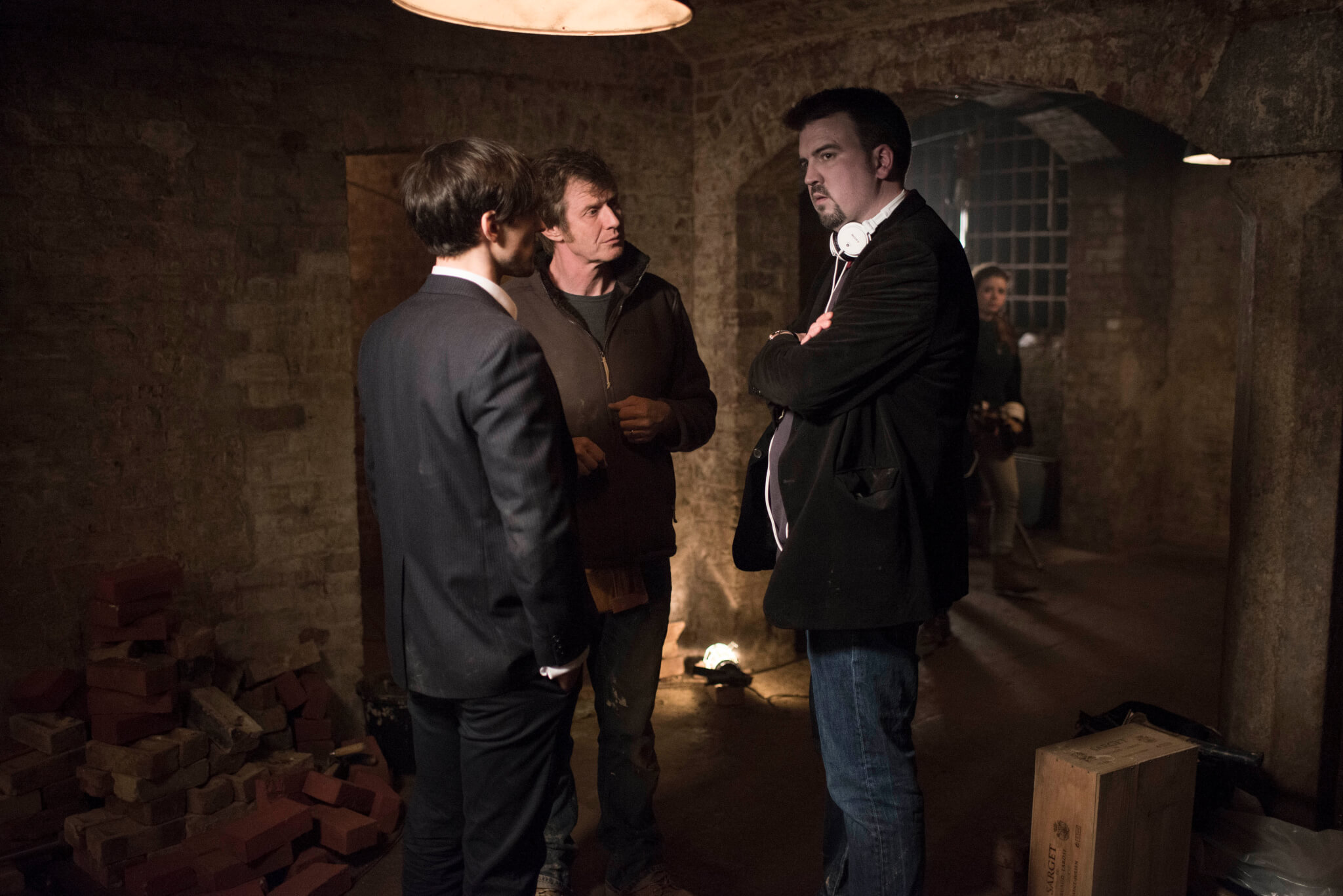 An award-winning filmmaker and award-losing journalist, Pierce’s shorts have been selected for festivals worldwide including Fantasia, FrightFest and the London Short Film Festival.

Directorial debut Bricks was described by David Fincher as a “classy take on a morbid classic”, while Godless creator Scott Frank called it “Beautiful. Deliberate and creepy as hell”. It won the Méliès d’Argent at the Abertoir Film Festival.

Among the praise for his other work, fourth short Promise was labelled “superbly done” by Never Let Me Go director Mark Romanek and “excellent” by The Guardian film critic Peter Bradshaw.

As a journalist Pierce has interviewed A-list actors and filmmakers for more than 20 years – including Angelina Jolie, Steven Soderbergh and Jack Nicholson – and has written for Esquire, The Guardian and The Sunday Times. He also regularly conducts masterclasses with A-list talent for the National Film and Television School and is a contributing editor for Empire, the world’s biggest movie magazine.

He has several feature films in development.

No idea, really. There was a moment though when becoming involved in film, in some way, seemed essential. It was secondary school. Our English teacher was off sick, so to keep the class quiet the supply teacher showed us One Flew Over The Cuckoo’s Nest. We were 15, but he said he thought we were mature enough. We were not mature enough. Still, it stunned me.

I’d already watched films pretty religiously growing up – scouring the Radio Times and recording whatever series of Westerns or Jimmy Stewart films the BBC was showing. I used to write labels on the videotapes with year, stars, and – perhaps tellingly – director. So I knew who John Ford and Howard Hawks were – and Hitchcock. But, growing up in Devon and Cornwall, with no family or friends in media or film, I don’t think ‘director’ occurred to me as a job. It wasn’t simply that it didn’t feel achievable. It was that the idea didn’t even occur to me.

I went to university to study journalism. I vaguely flirted with the idea of being a serious news journalist, maybe a foreign correspondent, but then read Martin Bell’s brilliant memoir about life in warzones – ‘In Harm’s Way’ – and thought, ‘What an incredible life, but I don’t want to get shot thank you.’ So, film was the way. I did a week of work experience at Total Film magazine and started contributing small reviews after that.

A former colleague says that when we first met I was smoking a cigar and saying I was going to direct films in Hollywood. I have no recollection of this, but it seems like the sort of cocksure idiocy I would have shown in my early 20s.

My memory actually is that by around 2004, I’d written a Western ($100m if it was a dime, everyone died) and then co-written a zombie-western (hilarious, scary, I still want to make it) and then put them in a drawer, as I re-joined Total Film as reviews editor, after a stint at the BBC, and then became deputy and then editor. I then joined Empire as editor-at-large (a kind of roving reporter) in 2008 and pretty early on I interviewed Jack Nicholson. We were at his house, chatting about The Shining and Stanley Kubrick, and I just thought, ‘Film journalism is never, ever going to get better than this. Time to get the scripts out’.

So I rewrote The Dead Ride Out and received very positive feedback on it from David Fincher, who I knew from journalism (I’d eventually plucked up the courage to tell him I’d written scripts, about five years after our first interview). I blew the chance of getting that made by insisting on directing (I hadn’t even directed a short at that stage and everyone thought, quite rightly, that I was mad). I did some for-hire work as a screenwriter and then finally directed my first short, Bricks, in 2015.

Having spent a lot of time interviewing US filmmakers, I had an idea of how the industry worked… in America. It wasn’t particularly transferable to the UK, where I think we’re much less open to people changing lanes. People were more open to the idea of me screenwriting, because it appears to be a more obvious shift from journalism, but on most of the occasions I spoke to people about directing it was met with scepticism – or a pat on the head. “The journalist wants to direct. Cute.”

I also got in my own way, perhaps, by being determined to make the first short in a particular way, for a particular budget, with a particular cast. So Bricks took quite a while to set up.

There’s also just life. I remember after shooting Bricks a filmmaker commented, “Oh, congratulations, you finally did it”. I’d been talking about it for quite a while, so there’s an element of that sentiment that’s fair enough, but there was the need to pay a mortgage and support my family. I’m not saying this like, ‘Poor me’ – we make our choices – but the pace of what’s possible changes at different stages in your life, with different responsibilities, and different opportunities. I say this aware that – as a white man who has already had professional success in a parallel industry – I have a much easier time of it than many others.

Bricks was funded via a few different people I’d met as a journalist – the producer Richard Holmes, the financier Julian Bird – and Stefan Allesch-Taylor, an entrepreneur who subsequently started a short film fund. I don’t really know him, but my friend, the publicist Esther Paterson (who I’d met visiting the set of her sister Debs Paterson’s film, Africa United), vouched for me and he liked the script. He then liked the film, as he partly funded each of the subsequent shorts.

Ghosted is a romantic comedy with Alice Lowe, which we shot in black and white partially for the look and partially so it wouldn’t look as cheap as it was. I think that’s illustrative of filmmaking, really: the combination of an artistic choice and a very practical one. That one came together quickly because of frustrations in trying to fund and schedule Lock In, which was part of Creative England’s iShorts initiative. We had to crowdfund to match their contribution, and I was very keen for everyone to get paid – even if not their quote, at least minimum wage. The fourth short, Promise, was a finalist at The Pitch, a short film fund for which I was a judge for many years. Hannah Lee’s entry didn’t win, but I loved it, so set about raising other funds to make it, as producer and director. Anyway, without being too long-winded (too late), each film was quite different in tone and the experiences of making them, for good and ill. I like them all, though Bricks remains the film I’m happiest with – maybe it’s the best, maybe it’s just the one that’s closest to my intention, maybe it means the most because it was the first.

I’m wary of speaking about ‘breaks’, because it’s often thought of in terms of ‘big break’. That encourages what I think of as ‘lottery ticket filmmaking’, the idea that you make one breakthrough film and then you’re set. Maybe that happens if you make Blair Witch Project, but I’ve come to realise you shouldn’t imagine yourself to be the exception to a rule. Most people won’t have a moment where they feel like they’ve made it. There is no ‘made it’, there is just ‘making it’. If you’re writing, you’re making it. If you’re shooting, you’re making it. If you’re getting paid for either or both of those things, even modestly, then you’re ahead of the game.

A director friend once said to me you never got to feel a moment of celebratory completion with filmmaking, because there are so many different stages. I think, then, the thing to do is celebrate every stage of finishing a thing – a draft, a shoot, an edit, a release. Try to enjoy the process, because you can’t control the result. And you certainly can’t control whether anyone will care.

I guess I ‘made it’ as a film journalist – I was earning a decent living, interviewing filmmakers and actors I admired – and that proved useful in filmmaking in ways people wouldn’t necessarily imagine. It’s helpful, though not as helpful as you might think, in terms of cash and connections (not many people want to put money into short films and most filmmakers are understandably too focussed on their films rather than yours). But spending so much time observing filmmakers on set – most consistently David Fincher, on each of his films since Zodiac – has been a personal film school. And spending so much time speaking with actors has really helped when it comes to working with them as a director. Figuring out how to help actors is probably my favourite part of filmmaking.

In terms of getting gigs, people focus a lot on getting an agent and it’s undoubtedly useful, but an agent isn’t going to decide what type of films you want to make, or realise what gives you the most satisfaction. The writer/director Stuart Hazeldine, who has been a great source of support and advice over the years, told me at our first meeting, “No one cares about your career as much as you do.” I didn’t quite realise the importance of that advice then. I do now.

I spent quite a long time focussing on one big (by UK standards) feature, which only really gained a lot of traction when I also set up a slew of other projects. Momentum is vital. One thing fuels another. I also spent quite a long time trying to be part of a writing team, doing things for hire. This was partly out of a desire to earn a living and partly out of personal obligation, but it was also partly procrastination – a way to avoid confronting my real career goal, which is directing features, and thus avoid the possibility of failure. And really, failure is a thing to be embraced in a way. It’s that line in One Flew Over The Cuckoo’s Nest: “Well I tried, Goddamnit, I tried. At least I did that.”

I’ve only directed shorts, so there are an infinite amount of people more qualified to comment than me (like, people who actually make a living at this), but I feel like the only things you can be sure of in filmmaking – like, absolutely sure of – are disappointment and uncertainty. If you know that, really know that – not just as a glib bit of proverbial pessimism – then nothing can help you (sorry, you’re stuck with it). But nothing can stop you, either.