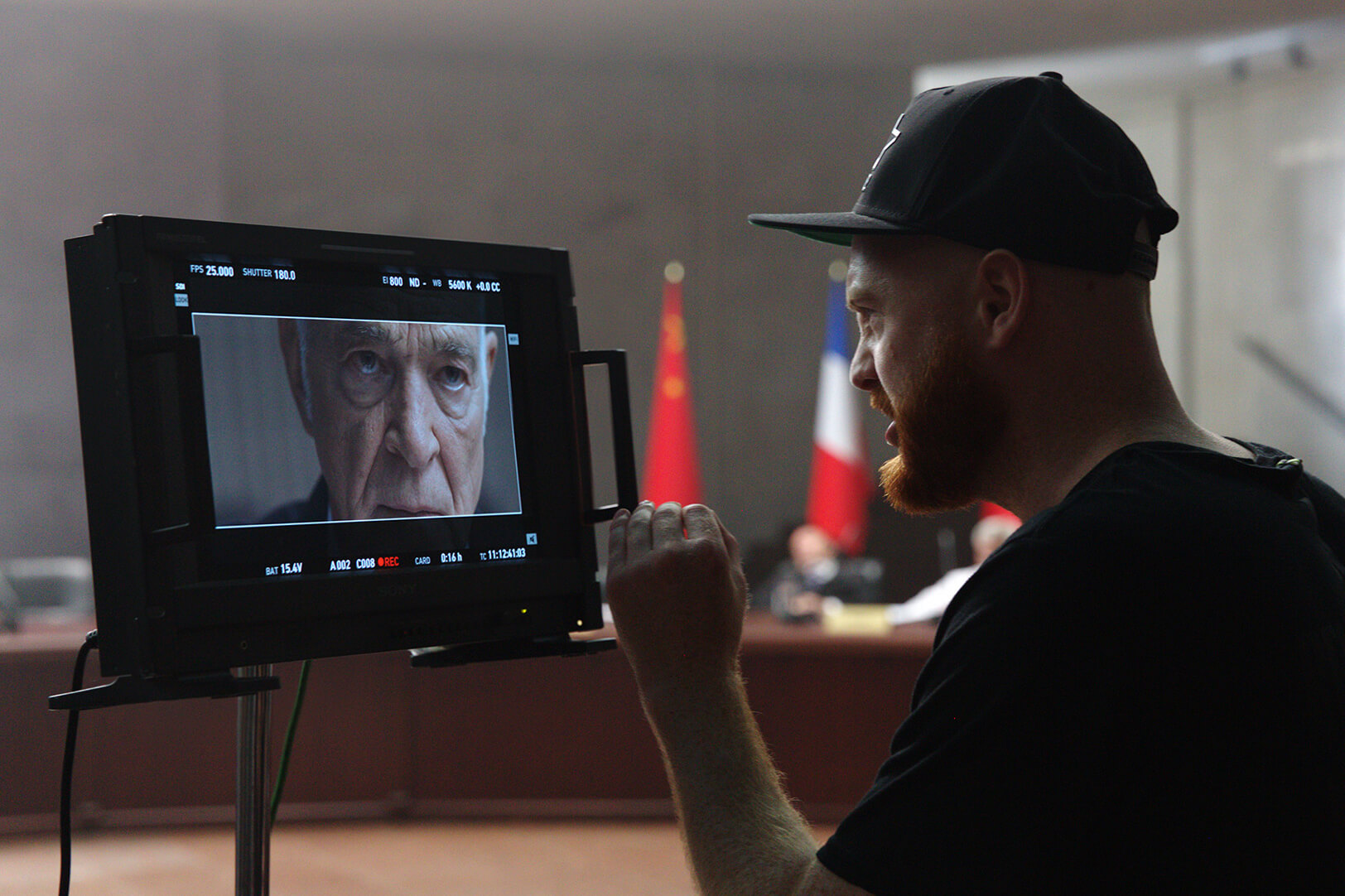 Sam Pilling is an award winning director renowned for his cinematic success. Known for capturing unique moments on camera, his music videos and commercial work have earned him an indelible reputation as a filmmaker.

Sam’s music video work includes the SXSW 2017 selected “Nobody Speak” for DJ Shadow & Run the Jewels, UKMVA winner “She Knows” for J. Cole, as well as “Pretty” and “Often” for superstar The Weekend.

His commercial work has seen him collaborate with the global clients like Sky Sports (“No More One Horse Race”), BMW (“Inner Child”) and Audi (“Born Restless”) to name a few.

I first fell in love with moving images at uni. I’d always thought I was going to be an illustrator, and went to CSM to study Graphic Design because they didn’t offer an Illustration BA. But the first term was amazing because the course offered students the chance to spend a week at a time working in different disciplines, from photography to typography to letterpress to advertising to… moving image.

I had always told stories through my illustration work but after experimenting with this new medium, I was completely hooked and ended up studying Moving Images for my whole degree.

Because we were at Art School, roles such as Director, Editor, Writer etc… weren’t so clearly defined. We were set briefs and worked in small groups across all aspects of the project – from idea generation, through to filming, editing, music production and sound design.

People within the group naturally fell into certain roles, and often played to their strengths – say if they were particularly good at VFX or animation – but this way of working gave everyone the opportunity to see just what a collaborative process filmmaking is.

In all honesty, it’s fair to say we didn’t really know what we were doing, and had no real idea what filmmaking in a professional capacity looked like.

Lucky for me, in the third year a good friend of mine, Tim Keeling, said he had been helping out as an on-set ‘runner’ for BLINK and suggested I joined him.

We began working for free, then gradually starting getting paid £100 here and there. But running on those early music videos was an education in itself!

I remember the first time a 1st AD asked me to ‘cable bash’ – I had no idea what he was talking about! But I was hungry to learn and to help in any way I could – whether it was with the Camera or Art Department. I actually think my first running job was on a Chris Sweeney music video!

These early experiences really opened my eyes to the amount of people it required to make anything happen – and again, it gave me a respect for everyone involved in the process. From the lowly tea-maker (me) right the way through to the Director.

As soon as I graduated, my parents wanted me to get a job. And quite right too – living in London is not cheap and I was up to my eyeballs in student loan debt.

So I literally sent hundreds and hundreds of emails to all the London-based production companies that I knew of.

At uni I’d managed to win two D&AD Student Awards for my music videos, and as fickle as it sounds, this was a great thing to be able to talk about in an email.

Even so, I didn’t hear back from most of the companies, and only heard back from one or two after sending multiple emails.

First up BLINK responded, and I did one week unpaid work experience – the highlight of which, was helping David Wilson with an in-camera animation, after work one night. But BLINK already had an in-house runner so I didn’t get to stay on after that.

Next I began running for Pulse Films, working on reception and making cups of tea. But when they realised I was afraid of the telephone but could design layouts and find interesting photographs, they soon employed me as a visual researcher – laying out and sometimes even writing other directors’ treatments.

After a period of three-months unpaid internship, at the start of 2010, I finally had a full time job.

However, whilst working as a Visual Researcher I tried to make as many of my own projects on the side using whatever funds, equipment or resources I could get hold of!

My friends Chris Lee, Paul Storrie and I entered a competition to make a music video for a David Lynch track, where we pooled £450 between us, filmed with my mate’s 7D, in and around my flat, used my mate’s dad’s car as a prop and his mum’s treadmill as a track and dolly.

To quote Don Logan in Sexy Beast:  “Where there’s a will, and there is a f*%King will, there’s a way!”

The first biggest setback I had was actually my day-job. After working at Pulse for the best part of a year, I’d got quite good at making treatments look pretty and they didn’t really want me to stop.

But the Head of Music Videos there at the time could see how hungry I was, so every now and then he would send me low-budget music videos to pitch on. But this naturally enough caused a bit of confusion, and I remember a heated argument where the powers that be were asking – is he a director? Or is he a researcher?

I certainly knew which one I wanted to be and did all I could to make it happen. Luckily enough an opportunity came up to make a music video for Actor / Rapper Riz Ahmed – so I jumped at the chance.

Again, I asked my friends Chris & Paul to help – and we tried to make something happen on a shoe-string budget. The shoot involved a three-car convoy car chase through Blackwall Tunnel without permissions, and several broken pieces of equipment. But as a result of the video, Pulse signed me to their roster.

However, trying to make a living as a music video director (or any director) is not easy. And the next biggest setback was in 2011 where I couldn’t win a music video pitch for the best part of the year.

Pitching is a terrible process – you pour your heart into an idea, and work your arse off for a week, only to find that the label went with a different director. It’s soul-destroying, and even worse if you are reliant on the small director’s fee for a salary.

As a result, 2011 was almost the end of me – both emotionally and economically! But however cliched it sounds, the old adage is true – what doesn’t kill you only makes you stronger. This difficult period helped me develop a thick skin and to have faith in my own ideas. Both valuable skillsets for a director.

For me, I think you are continuing to do both of these things for the rest of your career. Every film / short film / music video / commercial / feature film you make is a learning curve in some way. And in fact that’s what I love about being a director – every project is totally different, and comes with it’s own set of creative challenges that need to be problem-solved.

I didn’t go to film school – something I deeply regret – yet I only realised I wanted to after studying at Art School. And there was no way I could afford another degree!

But making music videos (and in recent years, commercials) has definitely been a great alternative to that. Over the years I have started to hone my craft – establishing a tone of voice, and working out what I like or don’t like, and the sort of work I want to make in the future. That isn’t to say everything I’ve ever made has been unequivocally ‘me’, but I always try to put my stamp on it, in some small way.

My experience in commercials has given me the opportunity to work with some supremely talented people, from all corners of the globe. In some cases working in extreme weather conditions or in hard to reach locations.

Sometimes the idea requires a huge cast and even bigger crew, expensive equipment and camera gear –helicopters, car-rigs, Russian Arms, Motion-Control Cameras, but at other times an idea might simply involve a three-man crew filming someone in a single room.

But both sides of this coin boil down to the same thing – you are conveying an idea or telling a story through a visual medium. It’s all communication at the end of the day. How I choose to communicate an idea is what makes me, me and how you choose to do it, is what makes you, you. And sometimes you don’t even know why you want to do something a certain way.

But taste and choices develop over time, based on the experiences you have, and the people you work with. I often think directors are like sponges – soaking up everything around us, feeding on whatever we can get our hands on or whatever interests us – whether it’s music, film, theatre, books, the news. etc., etc. You only have to watch The Story of Film: An Odyssey to realise that everyone is influenced by something and no idea is truly original.

I guess my first ‘break’ came in 2012 after making a very low-budget music video for SBTRKT. I was actually in the Pulse office at the time when the phone rang, and an American voice asked to speak to my Music Video rep.

To cut a long story short, Usher’s manager’s daughter watched my SBTRKT video and really liked it, so she showed it to her mom, who showed it to Usher… Before I knew what was happening I was flying to Atlanta to shoot a music video for the king of R&B himself.

Unfortunately the video isn’t anything to write home about but it paved the way for working abroad, as Pulse quickly set about getting me a US work visa.

From that point onwards, I have done a lot of work out of the US making music videos for J.Cole, DJ Shadow, Run The Jewels, The Weekend and Chaka Khan, and working on commercials for BMW, Samsung and Cadillac.

Another big moment for me was making the “Nobody Speak” video for RTJ. The video had a political message, albeit with a big pinch of ridiculousness and humour, and it came out at just the right (or indeed wrong) time – capturing the way people were feeling about politics, particularly in America, and as such it crossed over from just being a ‘music video’ to being a bit of content that friends were sending to each other, and employees were sharing round their offices. This really helped put me on the map as a director, both in terms of visual aesthetic and tone of voice.