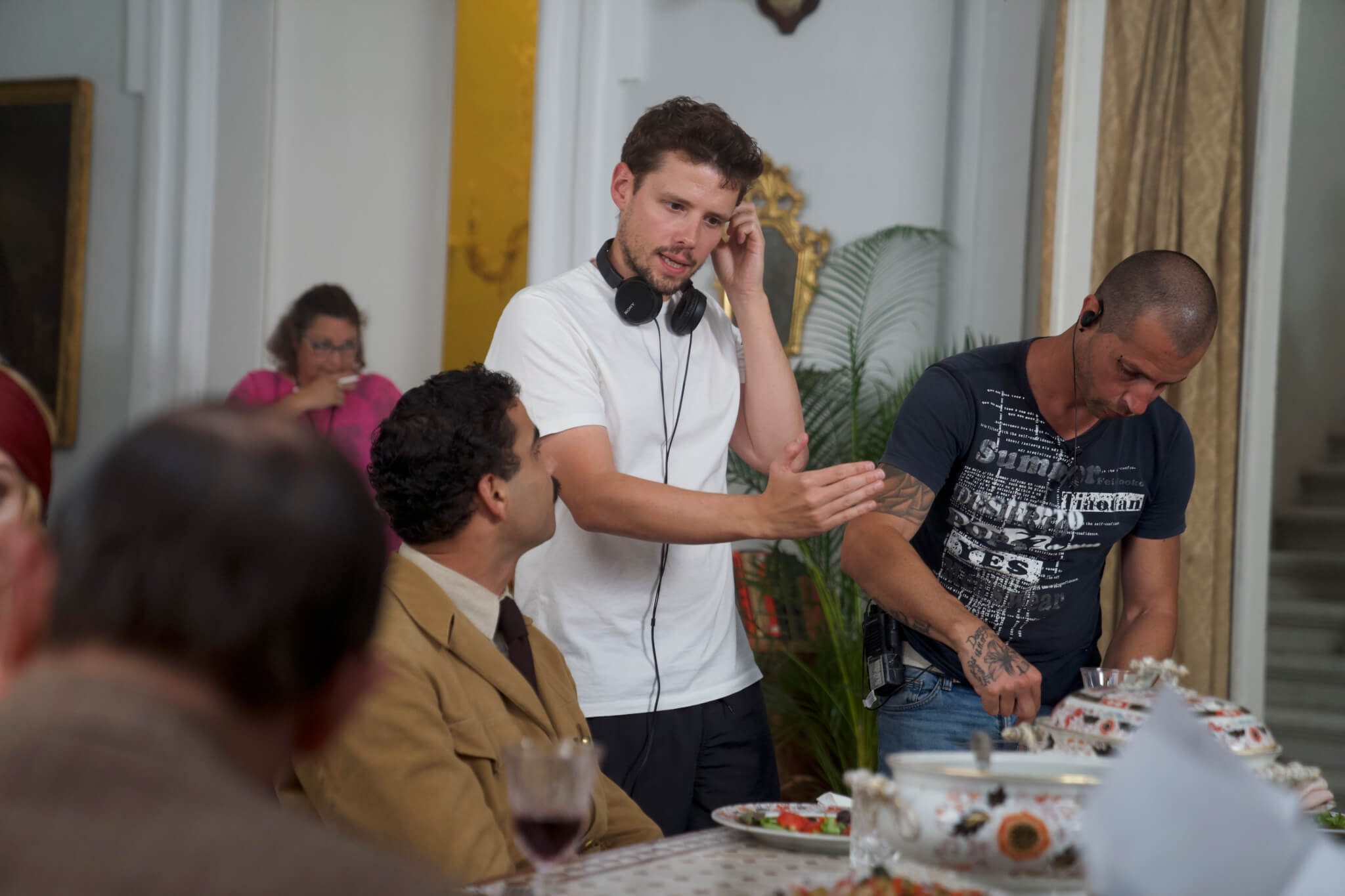 Sam Yates is an award-winning film and theatre director. He was named a Screen International Star of Tomorrow, and a rising star in The Observer. Yates has been described as “a major talent” in The Guardian newspaper and “a director of unusual flair” in The Observer.

His productions have been nominated for Olivier Awards: (Best Actress in a Supporting Role for Murder Ballad (2017), and Outstanding Achievement in an Affiliate Theatre for The Phlebotomist (2019).

I grew up watching films from a young age. My earliest memories are of going to a small video shop in New Mills (I grew up in nearby Stockport), and repeatedly renting Disney’s Robin Hood and The Sword in the Stone. These were also the days of getting the TV guide and running through it to highlight all the films that were on television the coming week, and diligently recording them onto VHS. In fact, I’m pretty sure all I wanted for Christmas were blank VHS tapes. I managed to build quite a good library, including all five Rocky films, a ton of James Bond Films, and The Godfather Trilogy.

Somewhere along the way I got pretty obsessed with certain actors, Pacino, Nicholson, De Niro, Streep, Keaton, Keitel. I’d follow them around from film to film, and if I saw their face on something in Global Video, (another local but sadly extinct video shop), I’d give it a try. After a time I’d start to follow certain directors, and, aided by the excellent and at the time relatively new IMDb, would go down rabbit holes of discovery.

All that time, I thought I’d be an actor, because being a film director seemed something exclusively for Americans from LA or NYC. But actors came from Manchester, and shows like Coronation Street and Cold Feet, and production companies like RED Productions, were all nearby, so it felt POSSIBLE.

I did drama at GCSE and A-Level and loved it. It was mostly on stage, but I was able to mess about with a camera in the school holidays as my dad would bring one home from his workplace. It was mostly the sort of spoof X-Files kind of comedy, some experiments in stunt fighting, and genuinely bizarre comedy sketches.

I also then wrote in to BBC Radio Drama in Manchester when I was 14 and Ailsa Acklam-Drury was wonderful in bringing me in for work experience, which led to a temp job as a broadcast assistant through all my summer holidays through university, and then a job in my 20s for Radio Drama in London.

So this mixture of watching films, drama GCSE at school, doing some local am-dram, and doing some running and extra work for ITV in Manchester, was a sign that I definitely wanted to be close to stories and actors and writing. But I wasn’t focussed especially on directing, I didn’t know that was an option, so I just kept hustling to be around whatever was happening and felt related to the craft of storytelling.

I went to university to study English, because it was deemed ‘safer’ than anything more directly linked to acting or similar. While there I directed theatre and a few short films, and experimented in combining the two forms.

While working at the BBC in my teens I saw that every actor was on Spotlight, a kind of wonderland for me at that age, as even seeing an actor’s CV and their AGENT’S DETAILS(!) made me feel plugged in to the secret undercurrents of HOW IT WORKS. So, I wrote in to them and got myself enrolled (I think it was easier back then, as I didn’t officially have any ‘professional’ credits).

While at university I got a voicemail from the then head of casting at the National Theatre, Toby Whale, who said they were looking for understudies for a new play by Alan Bennett called The History Boys. I had no real idea what that meant, I’d never been to the National, or even to London, so it was all very exciting and strange. Toby had clearly been searching for a northern, piano playing actor who could pass for 15. There can’t have been many of us around.

Suffice to say this led to me acting for a year or so after university, before focussing on theatre directing. Phyllida Lloyd gave me my first assisting gig at the NT Studio, and from there I felt that this career might be POSSIBLE.

It is different for everyone, of course, but for me I felt very much an outsider as I didn’t know anyone who’d taken the route I wanted to take, and London felt a very long way away. I had some kind of blind faith that it would all work out if I just kept going, but I didn’t have any sense of a route through, or any kind of plan above “keep going”.

For the first seven years in London I had an office job on the side of all my directing work, for which the pay was too low by far to pay rent. It took a lot of energy to hold down that kind of job while trying to charge forward and make a career as a director, but it is a small price to pay.

No one in my family or friendship group was in the industry, so I did feel like I was basically writing hundreds of letters, getting my foot into as many doors as possible, and then making myself indispensable.

These things were challenges, more than setbacks.

I guess some obstacles include self doubt, running out of money, and being fearful of where the next job is coming from. I don’t think these ever go away.

I started doing work experience on the set of Cold Feet, Donovan and Coronation Street in my early teens. All this came about as a result of writing letters and sending my CV to anyone I thought sounded appropriate, usually just watching the credits of a TV show and writing names down. It seems so simple but this alone is what got me onto those sets. And I wrote a lot of letters, and wrote a lot of second and third letters!

Directing work for the stage I was exposed to wonderful writers, including David Mamet, Ayub Khan-Din, and Eugene O’Neill, and actors Judi Dench, Ruth Wilson, Christian Slater and Matthew Broderick. Actors, in particular, have been a huge source of inspiration and support to me, and have undoubtedly contributed to my own craft. They are central to the craft of theatre and film.

The first professional short I made was called The Hope Rooms. I wrote to Mel Kenyon and Rachel Taylor at Casarotto Ramsay to ask which young writers might be up for penning a short film with me. They sent me a bunch of plays, and I liked very much David Watson’s style for the kind of story I wanted to tell. I paid David a tiny fee, an amount I secured from a donor who I had enthused about the project, again by letter.

David and I worked on the script for about a year, and then I wrote to agents of Ciarán Hinds and Andrew Scott, and after some meetings and sharing my vision for the piece, both actors accepted.

I raised half the money by writing hundreds of letters to people who support the arts and film sectors, offering them incentives like “Be an extra!” or “Come to exclusive screenings!” for their donations.

I am not the first person to say that rather than one big break, I’ve had a series of incremental pieces of good fortune that add up over time.

I consider my first break being invited to do work experience at BBC Radio Drama in Manchester, after writing them a letter. I was 14 and it was my first step into this business.

An important moment was commissioning, casting, and directing my first short film The Hope Rooms. That was something I just felt I HAD to do. That film acted as a statement of style and an indication of my voice. Without some kind of showcase of your style or taste, it seems hard to progress. Producers need to SEE something, otherwise all you have are words.

And I really think that however you make the film, on a phone or produced with top-end equipment, that the director’s voice is there.

I have learned the most about directing by DOING it, in a big way, a small way, but doing it, by turning up even when it seemed pointless and having the courage to get it totally wrong and fall on your face in public.

A key break for me was learning not to care what anyone else thinks, and to concentrate on your own craft.

I learned pretty early that nobody owes me anything, and nobody was going to seek me out in the weeds and pluck me out and carry me to the studio lot, however much I wished that to happen!

Keep knocking on doors, keep hustling and keep moving. And perhaps most important of all, keep MAKING.