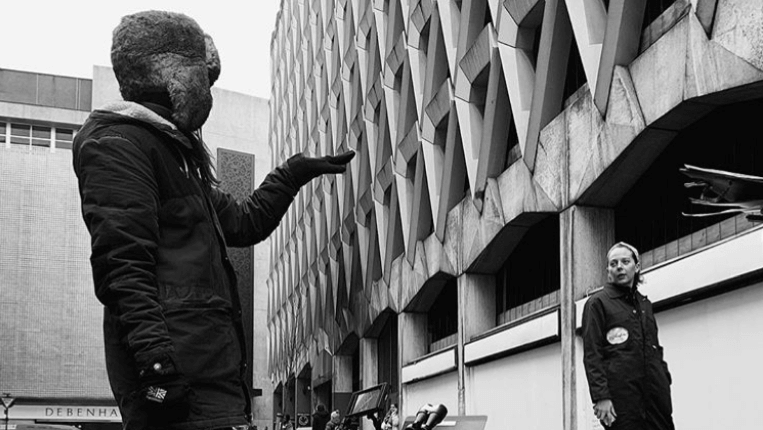 Stella Scott is a director from London signed to Pulse Films. She graduated from Central Saint Martins in Performance: Design and Practice.

Stella’s current slate includes a short film in development with BBC Films produced by Sorcha Bacon, and a short film co-written with Victoria Rigby produced by Amy Wells. She was part of iFeatures 19/20 programme.

Her original work has been commissioned by Film London, Gucci, Chanel, the Tate, Dazed Digital, Art Night and Victoria Miro and screened at festivals worldwide. She has developed a compelling storytelling style and is invested in creating indigenous work with new British talent.

I grew up in South London during the ‘80s and ‘90s. It was an incredible place to live. I felt like I was surrounded by big characters and stories. I spent a lot of time observing things back then. I was very silent and I was trying to express myself through other people who were better with confidence and words.

Films were a similar source of connection and release. I remember watching My Life as a Dog and really feeling the boy’s questioning uncertainty and enthusiasm for life. Or Stand By Me and feeling the boy’s friendship and River’s social exclusion. Watching films was an easy way to experience things too.

I took a lot of photos in my teens. I really wanted to document everything around me. My brother studied at Camberwell Art College and had a video camera that he used for his films that I sometimes played with, but making films wasn’t on my radar.

Art, sometimes English, were the only classes I was good at. My art teacher said I should do an art foundation so I applied and went to Chelsea College of Art. I made a sculptural installation the first year (and not much else) and decided I didn’t want to spend much longer working inside a studio. I was very social and outgoing during this time, and I really wanted to go out in the world and work on things with other people.

I considered set design. I imagined it would be a way of being creative, telling stories, and collaborating with people. I went on to study a BA in performance design: and practice (performance art and set design) at Central Saint Martins College of Art.

First notion of wanting to direct films: I did two weeks work experience on a film adaptation of Fat Slags with set designer Grenville Horner. I was assisting the set dresser; we spent days ordering tins of beans and building towers of chips and every time we finished dressing the set (and the crew entered to shoot) I was sad to leave. It  was like setting up a series of parties and not being invited to even one.

I didn’t let that feeling properly sink in though. I had no idea what role I could play on set and I certainly didn’t want to turn around to the set dresser and say I wasn’t satisfied. I continued to work in the art department designing, dressing and building sets throughout and long after my degree.

At the same time I was working at South London youth charities making theatre and art projects with young people. I started using photography and filmmaking as a way of working with some of the older clients because it drew people in. It was immediate, fun and effective – a constant mode of intimacy. My brother lent me a mini-DV camera and taught me some editing basics; I picked up the rest of what I needed to know from tutorials on YouTube.

Shooting and editing these participatory films was my way into directing. The role of the director became clear to me by navigating my way through the logistics, working collaboratively and piecing stories together from rushes. I saw it as a career I could and wanted to pursue.

I made a lot of participatory films with youth charities across London.

I wanted to make a fiction film and applied with a story from childhood to the London Calling scheme, 2009. Finding Sol was the first fiction short I made: it was the first time I was casting and directing a straight narrative piece, working with a pre-determined story, working with a budget, and communicating ideas and objectives against a ticking clock.

I still have the storyboards I sent in as part of my application. I didn’t know it then but I was trying to make a hybrid doc, and I ended up fictionalising it horribly. I wished I’d followed my instincts more, or at least fought for the thing I saw inside my head, but I didn’t have the language to communicate it or the balls to experiment with it. I’d stepped into the world of fiction filmmaking and felt like I had to adhere to it.

Sometimes I’m haunted by the things I haven’t made, especially Finding Sol, because I literally had the time, money and opportunity to make it, but what can you do? Sometimes what you gain from making a film is not accounted for in the final export.

The film got into Underwire Festival and nominated for a Best of Boroughs Awards which introduced me to a crowd of independent filmmakers but it wasn’t strong enough to open up any doors (to get people interested in working with me). Knowing where to go from there was difficult.

I applied to a directing course. I got an interview and I thought it went really well (I remember speaking a lot about Stephen Poliakoff which I thought was pretty niche) but I didn’t get a place. I must have asked for feedback because I remember the response being that they thought I didn’t have a strong enough voice. That was difficult to hear. It felt like there was a finality to it: as in you either did, or didn’t have a voice. And if you didn’t you couldn’t be a storyteller.

I went back to documentaries, and being led by someone else’s voice rather than my own. I love watching and making documentaries and I can see how my personality lends itself to making them, but I knew I wanted to make fiction again at some point.

The rejections should spur you on: if they matter to you it means that you’re pushing in the right direction.

I brought a Canon 5D and a lens, began shooting more stuff (friend’s music videos, charity films, indie docs and zero-budget fiction shorts with actors I met), and got freelance gigs filming events and making participatory films. When I was at a decent level my brother introduced me to an ad agency he was working at called U-Dox and I got freelance work there as an edit assistant.

I guess you could chalk that up as nepotism: my brother helped me get my foot in the door, inspired and backed me. But I wouldn’t want to suggest that nepotism is needed and man, have I resented other people for having what I thought was it (please don’t compare yourself to anyone else because it’s competitive, self-diminishing and counter productive). I think connections are out there to be made: and the best way to power your career is to go out, seek and build on the ones that feel right to you. The people you hit it off with will be the people you will make the strongest work with.

I befriended an assistant producer whilst working at U-Dox called Jessie Ayles, and after some time we pitched Street Angel to Dazed Digital via the company which got a Vimeo Staff Pick. We had each other, a small budget and complete freedom which I think helps you interrogate, determine and realise the film you want to make.

Documentaries had a commercial appeal at the time, so I started working commercially. I set myself up as a company and hustled hard. I was doing anything from working as an editor for hire to working direct to client producing and directing online content. In-house production companies at advertising agencies were a good place to get gigs, and making films for online platforms like the Tate, Nowness and Condé Nast was a good way to build my profile. I was asked to pitch on a Gucci film with Condé Nast which I won, and that helped push things forward.

I started seeing a style in the work I was making. I got my very talented friend Bonnie Abbott to design a website for me and when I had bit of work I reached out to every production company in London with the link and PDF portfolio asking for representation. I was offered gigs by a few to test the waters, but I wasn’t taken on by one for a while – I signed to Pulse Films for commercials after about a year or so.

I’ve written and sent out hundreds of pitches for work, funding, backing, access, collaborations, talent programmes… many of which I’ve finished and emailed out late at night, never heard back from and forgot I’ve ever even sent. Let’s just say I often get rejection emails for applications I don’t even remember applying to and I was pretty surprised when I was told I wrote 66 music video treatments at Pulse Films before I won my first one.

In terms of finding my voice: I’ve been writing in my spare time. The agents at Pulse Films have helped me get a grip on how to develop, communicate and pitch my ideas, style and interests. The subjects I’m drawn towards are becoming increasingly obvious to me everyday. I make small photography and art projects and short docs as a way of exploring the kinds of characters, aesthetics and themes I’m interested in. Whilst directing I’ve become more and more responsive to what feels right and learnt to trust my gut instinct even when it doesn’t feel trustworthy. I’m working on prioritising and shaping the kinds of films I want to make.

I guess making Street Angel was the first break that got people being interested in working with me. Having access to people who’ve help me develop my work has had the most significant impact on me. Along with the agents at Pulse, I’ve met producers Sorcha Bacon and Amy Wells via my commercial work. Both producers have been vital in helping me turn my interests into writing. After developing a fiction slate for the past couple of years, I’m making two short films and have taken part in the iFeatures scheme as a director. I recently reached out to film and TV agents and after an introduction from a friend I signed to Sayle Screen.

It’s been 14 years since I made those first participatory films. I feel like perseverance and determination have helped, and a sense of having nothing to loose. Sometimes I don’t feel like I’m anywhere close to being where I want to be, and question whether I even have it in me. There’s momentary setbacks, and overwhelming feelings of failure and self loathing, but all in all there’s a real kick from overcoming all that and doing something you love.