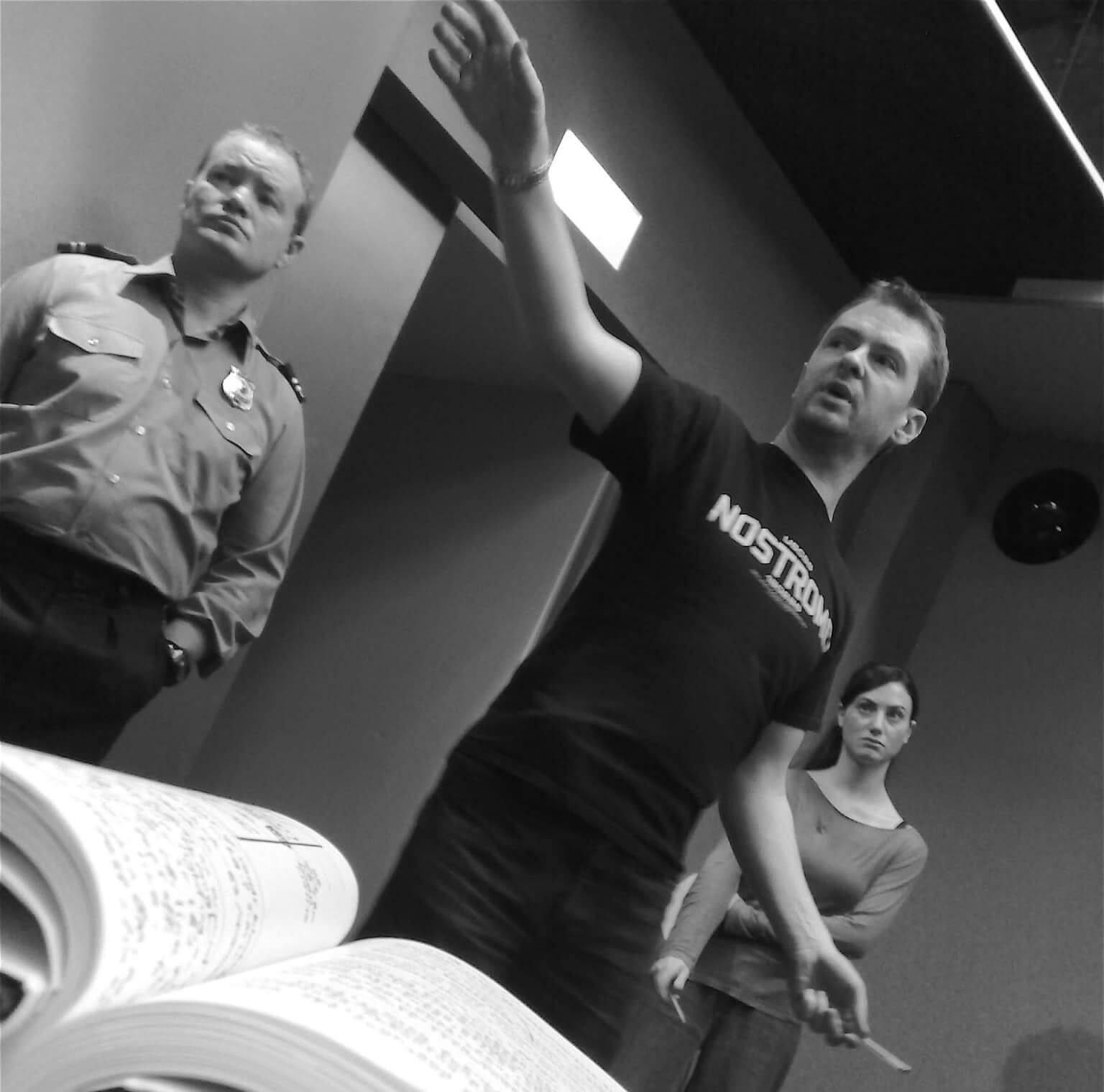 Stuart Hazeldine is a British screenwriter, film producer and director. He is best known for his 2009 psychological thriller Exam, for which he was nominated for a BAFTA Award for Outstanding Debut by a British Writer, Director or Producer. He also directed the 2017 film adaptation of William P. Young’s novel The Shack.

I was obsessed with movies, particularly sci-fi movies, from as far back as I can remember. In school I was always obsessively churning out drawings to realise my far-out (yet mostly derivative) imaginings. People thought I would become a comic-book artist one day, but in my mind the pictures were moving – they were storyboards. Come secondary school, creative writing courses kicked in – and the stories I wrote were ten times longer than those of any other kid in class. They had chapter headings. Looking back now it seems obvious where I was headed, but at the time it wasn’t. It was a hobby I loved, not a career path to follow. Although I was one of the few ten-year-olds in the playground who even knew what a film director was, and could cite those I admired, I couldn’t imagine actually becoming one. How did you even pursue that goal? It’s not like a career officer will tell you, or would even know. The closest I could get to making film in future mentally was maybe becoming a special effects guy who would get to blow things up on set.

Then I went to university, and one day I saw a poster for a filmmaking society on my college noticeboard. This blew my mind. A society where people MAKE FILMS? I wasn’t one of those kids whose dads gave them a little Super 8 camera or camcorder, so I’d never even seen a camera. But at the first meeting the American grad who set the society up stuck a Super 8 camera in my hand (and everyone else’s), gave me three minutes of film and said, “Go shoot something.” So I did. Then I learned how to physically splice it together and I screened it to the group. It was terrible, of course, but I got the bug. I knew right then, at 18 years old, that telling fictional stories using images was what I wanted to do, and if it doesn’t sound too high-fallutin’, what I was supposed to do.

I sensed from day one that the key wasn’t just to have the right sensibility and to make good works, but it was important to stand out, to be noticed. Selling is part of the business.  A lot of money is involved so people need to trust you and you need to show confidence and communicate what you want clearly, before making something as well as while you’re making something. Otherwise you won’t be making anything. So I decided to make something bigger, more ambitious than any student on campus every year. In my second year I made a 45-minute video drama when everyone else was still stuck making Super 8 shorts. Then I studied in America for a year, requisitioned the bigger video cameras of the town cable access TV station (remember Wayne’s World?) and made a feature-length movie between classes. When I graduated I applied for the National Film and TV School but got rejected. I was accepted by Columbia University for an MFA in Film Directing, which was a prestigious course and I was desperate to go, but even though they offered me a partial scholarship it still left me well short of the amount I would need to pay for it, so I couldn’t accept. Around the same time I wrote my first proper feature script, a Die Hard-on-the-tube actioner called Underground, and I sold it and got an agent, so I decided to work my way up to directing through writing.  The script is the foundation of the movie, and many of my directing heroes could also write well, so I figured it was the ideal route to the director’s chair anyway.

The initial obstacles I faced to advancement in general were my youth and the mentality of the British film industry.  We very much had a tradition of specialism, where you pick one skill and develop it, you don’t stray outside those tram lines, so the biz at that time wasn’t nurturing of writer-directors. There were very few British examples to look to. Also, there was an apprenticeship mentality, that you must ‘do your time’ before being allowed to step up to the next level. So to sell a script and get an agent at 24 made me an anomaly – I’m not sure if any other screenwriters were as young as me in the mid ‘90s, so I found that in many of the general meetings I took with execs and producers, they were reacting to me more because of my age than because of my ability. I didn’t think that my age should be part of the discussion at all, so I felt frustrated because I had a lot of energy and ideas and I didn’t want to wait until I had ‘done my time’ to reach the next level.

Predictably, I had to go to LA and sign with an agent there for things to change. No one in LA cared about my age, they only cared about what I could do. Over there my confidence was a positive thing that made them feel good about paying me the big bucks, whereas over here it was often misread as arrogance. Instead of the clubby ‘filmmaking as a hobby for well-to-do producers’ atmosphere of Soho, it was a large-scale industry and a pure meritocracy – and I flourished in that atmosphere as a writer, scoring assignment after assignment from the studios for a decade or so. But every time I tried to get someone to back me to direct something, even over there, it never seemed to happen. Maybe it was bad luck. Maybe it was me not writing the correct piece of material for a containable budget. But when I DID find that piece of material I had amassed just enough cash from screenwriting that I could finance it myself on a shoestring. I liked the idea of controlling a movie, having creative freedom within my financial constraints, and having final cut – so that became my first film, Exam. I literally bet on myself as a director because no one else would, and luckily for me it paid off.

I didn’t go to film school, and I never read one of those How To Write Scripts books, but I marinated in movies from a young age. Watching thousands of films and reading hundreds of scripts was my teacher. Many critics and film lovers identify a director’s work by their visual style, but I never wanted to have a strong style. I wanted to hop between genres as the muse took me, and have the material dictate the style – probably that’s the writer in me pulling the strings. I hate it when directors try too hard, usually early in their careers, to be noticed by imposing a style on a film, scene or moment that doesn’t fit. We’ve all done it, the ego takes over and it becomes ‘look at me!’. So I try to let the idea, the script, the other comps in that genre whisper what it wants to be, and then I involve my HoDs in a discussion. It’s good to have a clear vision to guide people, but if you get too rigid about imposing it all the talented people you’re working with don’t get to feed their thoughts into what he film is becoming. But in general I am a big fan of learning on the job, making your mistakes, seeing what works and doesn’t work in the moment, in camera, in the cut. If you know what the core principles and themes are and you have good taste and you understand your characters, the path will make itself plain as you go.

As a director I simply wrote a low-budget script, looked at my bank account and said “I am/we are green-lit!” I did that twice, for a twenty-minute short I made in 2003 called Christian, then again for Exam. My studio directing break came with The Shack for Lionsgate. I knew the producer from having worked for him as a writer, and he had lost two different directors already because they didn’t see eye-to-eye on the core theme of the story they were telling. He had one last crack of the whip at getting a director so he needed to find someone who really understood the material and would guard what was most important about it. I was that guy. I had read the bestselling book they were adapting, knew why it was important and it turned out I got it more than the other candidates they were considering.  Eight different directors walked in and pitched the studio for the job, and every one of them was more experienced than me. But I walked out with the job. They usually can sense who is really passionate about their project and who really understands it, even if it can take some time to find that person and, if they are less experienced, to work up the courage to hire them.