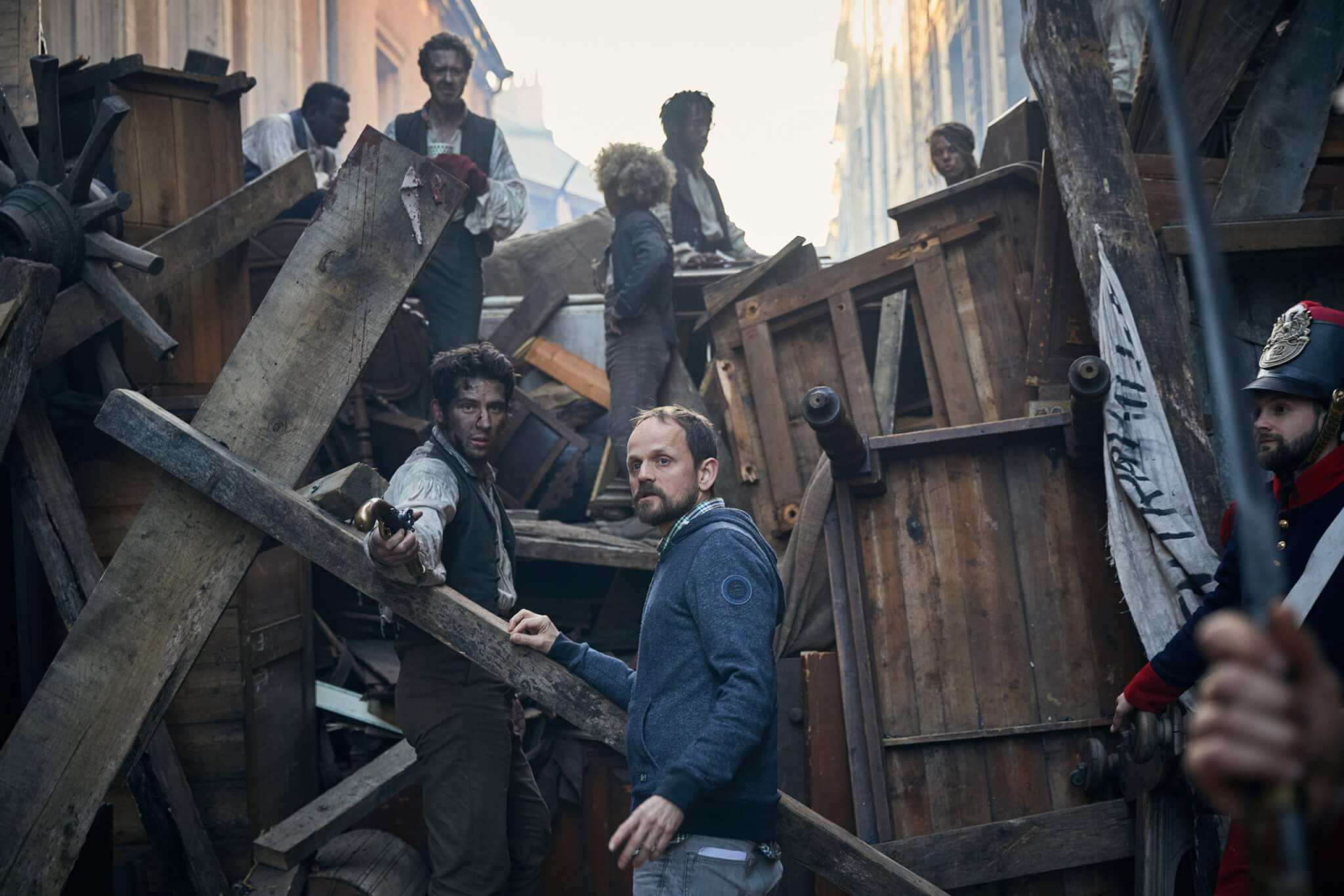 Thomas Otto Shankland is an English film and television director and screenwriter. He is known for directing the films WΔZ (2007) and The Children (2008), and television series such as The Fades (2011), Ripper Street (2012), and The Missing (2014); for the latter, he was nominated for the 2015 Primetime Emmy Award for Outstanding Directing for a Miniseries, Movie or a Dramatic Special.

As a teenager growing up in Durham, the film industry seemed a long way away so directing wasn’t something I every really thought about. I loved photography and had an ancient enlarger in the room where we had the boiler. There was nothing more fun than turning on the red light, lighting a cigarette, spilling ash on to the on to the photographic paper and fantasising that I was David Hemmings in Blow Up. I was also in a band so music and photography excited me more than filmmaking at that point. My parents were big cineastes and fuzzy VHS copies of Bergman and Fellini films were often on the TV. Fanny and Alexander was obligatory viewing at Christmas! So the idea of ‘cinema’ as an art form was lodged somewhere in my brain from an early age. At university, I directed and acted in plays, but when a house-mate produced a Super-8 camera and declared she wanted us to make a feminist film about Maria Callas, everything changed for me. I knew nothing about Maria Callas and we had a budget of about £100 but me and Leslie made what we were convinced was an amazing, Godardian, sur-realistic, avant-garde classic. Needless to say, aside from a great soundtrack of Callas arias, the film was pretentious nonsense but the process intrigued me. All my enthusiasms – photography, music, drama – were woven in to one amazing medium. Plus the power of editing, sound design. That was it for me – I didn’t want to do anything else. The excitement was definitely more about the medium itself than any massive urge to say something at that point. Narrative, character, particular themes – they were all things that interested me later.

After university, I still didn’t have any contacts and my ego was too fragile to face 300 rejections for a running job, so I set my sights on going to film school – specifically the NFTS. That meant actually making a GOOD short film to apply with, so I begged and borrowed kit, applied for any film scheme or course I heard about, scraped money together from any ‘not-a-proper-job’ going (prison line ups at Kilburn police station, sperm donor, artist’s model,  dogsbody for a pill-popping architect), and slowly the short films got better. This was a tough period and it went on a lot longer than I would have liked. Knockbacks were an occupational hazard and it was exhausting having to master the art of persuading people to do stuff for free, but finally I got in to the NFTS.

Rejection, competition and intermittent feelings of total creative inadequacy seem to be part and parcel of most people’s experience trying to kick off a career in the film industry. I had a friend who worked at the old Everyman and he could get tickets to any of the Independent cinemas in London – there were many more at that time. He wangled me freebies and, however down I ever got about trying and failing to get my foot in the door, there was always a mind-bending 9-hour Tarkovsky triple bill or Kurosawa fest to blow my mind and send me buzzing back out into the night, reinvigorated enough to give the door another push.

I’m in awe of those directors who make incredibly confident and authored films in their early 20s. I wasn’t one of them. My first shorts were a bit too ‘ideasy’ or derivative and always bit off way more than the minuscule budget could chew. They improved when I started working with writers who had a much better sense of story and character than I had at that point. I worked as a script reader at Channel 4 around the time I was going to NFTS, and that was a great crash course in what makes a script work. It seems bizarre to me now, but at first, I thought ‘story’ was a bit of an old-fashioned, conventional thing – pure cinema was all about playful and self-conscious games with the form! Film school isn’t for everyone, but it definitely worked for me. I loved the film library at the NFTS, the endless conversations about cinema with other students, the workshops with DoPs like Slawomir Idziak (a hero of mine because of his amazing work with Kieslowski), revelatory talks by people like Walter Murch who presented The Conversation and his reworking of the opening of Touch of Evil based on Welles’s extensive notes, having Stephen Frears in and out of shoots and cutting rooms, entertainingly imparting his Tao of simplicity and clarity – it was all mind-expanding. In this context, the films you made really did push you to figure out who you were, what your point of view was on a story – a character – a feeling you wanted to convey with the medium. At that time, the NFTS had a policy of teaming directors up with writers and crew in the first year and letting you do your own thing as a director in the second year. In the third year you were pushed but not forced to collaborate. The best thing about this was that I ended up working on projects that I never thought I would have enjoyed like a dark and dirty horror film! When it came to the ‘do whatever you want’ project, the film I made ended up being much weaker than the thriller genre pieces I made in my first and third year. I was surprised to find that I was able to express myself better when I had to engage with a few genre rules. I also loved the way that genre films invite you to use all the tricks of the medium to take the audience on the best ride. I’m not too bothered about the whole notion of  defining my voice as a director. That feels like a very conscious imposition on a process which is often at its best when the unconscious is making decisions. The more playful you can be at every step of the process, the more you liberate the part of your brain that makes the most interesting choices. Being playful and trying things out also helps create a space for all the collaborators to feel fearless about expressing themselves. You want everyone to fire into the creative process. The best things I’ve done have lots of voices in the mix.

My first year film at NFTS was a ‘without words’ project. The writers weren’t allowed to use dialogue and the directors weren’t allowed to record any sound on set, so the whole soundscape of the film had to be created in post. It was a fantastic and simple way to push the students to think about the power of visual storytelling and the incredible importance of sound – half of your film. The script was a horror film about a homophobic guy who goes cottaging and ends up having sex with someone who metamorphosises into a monster. Or is it in his head… ? This was all new territory for me but I had a great time building the tension with the actors, hunting around for creepy, interesting angles and figuring out how to do the monster on no money. An experiment with eels failed spectacularly so we ended up doing pick ups using the producer’s arm covered in a hair-gel drenched stocking – all shot on a macro lens. Don’t show the monster is a very important mantra on a no-budget horror film! Once all these enigmatic glimpses of the producer’s arm snaking across flesh were cut together, the effect was nicely disturbing. As we hadn’t recorded any sync sound, aside from all the moody atmos’s and effects, I had to voice the breaths of both guys having sex with each other. All this was really just an exercise, but maybe because I was just having fun, it all came together with that great, rare feeling of effortlessness. The two guys were great – the designer painted the set a lurid dirty yellow, the DP lit everything in a beautiful Caravaggio-ish gloom. The editor and sound designer got the tension just right. Somehow, a young agent at Independent saw the end result and was enthused. We met, got on (or got drunk) and that was the beginning of my adventures in the professional side of the film and TV industry. After all my Bergman-ish auteur ambitions, a violent little horror film which featured the sound of me having sex with myself, turned out to be the thing that got me a break. Pretty soon after we met, my agent got me a meeting with some producers who were setting up a new show at the BBC called Hearts and Bones. After many more meetings, I was stunned to hear that I had been offered the job. On a film school shoot, concepts like ‘schedule’ and ‘overtime’ are somewhat abstract, so that job was a true baptism of fire, but I more or less survived to tell the tale.