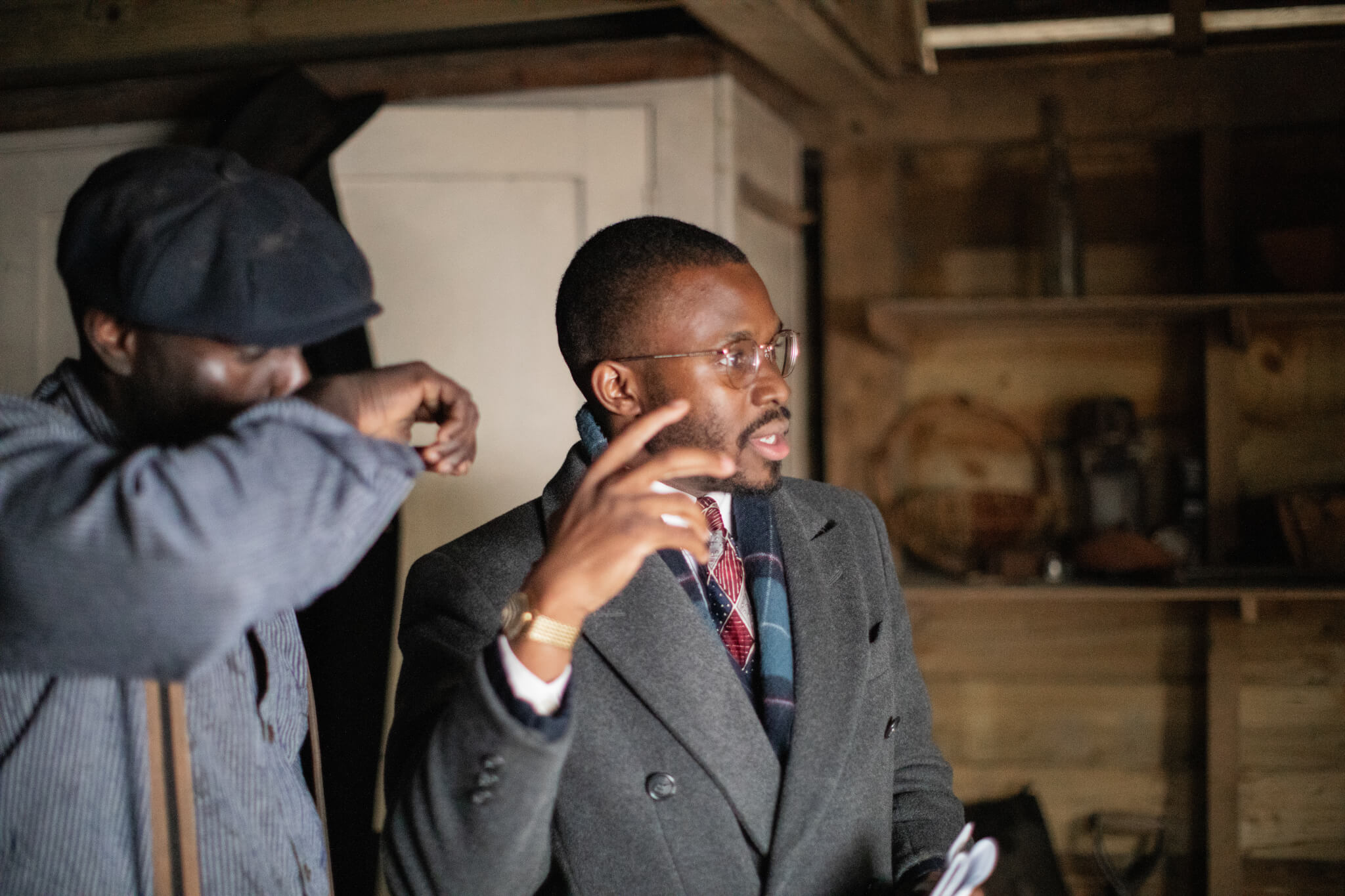 Tomisin Adepeju is a Nigerian-British filmmaker based in London, England.

Tomisin is a 2018 Edinburgh Talent Lab alumnus, he has just completed two new shorts, Oil and Appreciation. The latter recently had its World Premiere at the Oscar-Qualifying Pan African Film Festival 2019 and its North American Premiere at Oscar-Qualifying Aspen Shortsfest. The film was also an official selection of BFI London Film Festival 2019. He is currently developing his debut feature.

I was born in Nigeria but moved to England when I was 12 years old. In Nigeria, I had been exposed to the moving image but it was through the lens of Nigerian soap-operas that were on television in the evenings and on weekends. I occasionally watched American films with my family; I was definitely too young to watch this but I distinctly recall seeing Paul Verhoeven’s masterpiece Starship Troopers as a 10 year old, it was a truly unforgettable experience. I was blown away by the story, themes and breathtaking action sequences. I enjoyed watching films with my siblings but I wasn’t really deeply interested in cinema. This, however, all changed when I moved to England.

In England, films became my escape. When I moved here, I felt this sense of loss for the community I had left behind. London was a very stark contrast to Nigeria so I struggled to fit in, I was definitely the quiet kid in class. I was also mocked and teased because of my strong Nigerian accent. I decided I was going to change my accent so I started watching British and American films and TV shows. I fell in love with the moving image in the process. I watched closely and imitated how the characters spoke, I started with Soaps like EastEnders and Emmerdale, then gradually progressed to single dramas on BBC and Channel 4. Then I started watching the American films that would play on TV on Saturday and Sunday nights. Film is such a powerful medium; from my flat in South London, I would travel to France, Spain and America in one evening. It was such a mind-blowing experience. I consumed so many films that my accent is now a very weird amalgamation of Nigerian/British/American.

It wasn’t until I was 14/15 years old that I realised that someone actually directed all these films I loved. I remember I was watching a lot of work by Steven Spielberg and Martin Scorsese at the time and I was inspired by the fact that these directors created their own cinematic language and universe; they crafted worlds that had a singularity of vision and voice. I decided I wanted to do what they did, that’s really when my filmmaking journey began.

The first step was breaking the news to my parents. I remember the dread, shock and horror on their faces, they couldn’t quite believe what I had told them. There was no precedent for this, there are no artists in my family so it took them a long time to fully accept the fact that I wanted to pursue filmmaking as a career. I enrolled in university when I was 18 (Royal Holloway) and embarked on a degree in film and TV studies; the three years I spent there were absolutely incredible. The degree introduced me to international and world cinema, I discovered the work of so many talented filmmakers and important film movements like the French New Wave, Italian Neo-realism and so many others. The knowledge I gained was absolutely invaluable. I left university with a deep love and appreciation for cinema. Although I studied a purely theoretical film degree, I made several shorts during my time there.

When I left university, however, I was in a state of limbo for some time. I was unsure of what path and direction I should take. Unfortunately there isn’t a specific blueprint on how to become a film director. During that period, my parent’s fears and worries were justified as I was just at home watching films. I decided to do some extensive research into the filmmaking trajectories of some of my favourite directors. I discovered the work of Spike Lee in university and consumed a lot of his bold and powerful films. I realised that he went to NYU Tisch Film school, one of the most prestigious film schools in the world, so I made it my personal goal to study there. So, at 21, I got a job as an usher at a West End theatre and began to save every penny I got. I managed to save £14,000 in three years. One day I decided to look up the admission fees for NYU and my heart sank when I realised that I would require over £60,000 for the film programme. Even just writing this now takes me back to the moment it dawned on me that I would not be able to go. It was absolutely heartbreaking. The thought of attending NYU had really inspired me to save that much money, my parents definitely didn’t have an extra 40K to lend me. I even considered just travelling to New York and working as a waiter but decided against it because of how expensive New York was. The realisation that I wouldn’t be able to afford NYU really broke my heart. I decided to look for film schools in England and I found one that cost exactly £15,000. It was called Met Film School based in Ealing Studios in West London. They ran a one-year masters programme on film directing. I borrowed £1,000 from my parents and then enrolled in the programme from 2014-2015.

I became a director upon completing film school in 2015. I say this because I left the programme with a complete understanding of my identity and voice as a storyteller. I knew what type of films I wanted to direct and how to realise the ideas I had. The journey, however, to get to that moment was immensely difficult. 98% of the friends I had at the time just did not love film as much as I did.

Filmmaking, for me, was a deep obsession and passion. I had to almost bribe/beg them to come and help me out with the films I made before I enrolled in film school. This ultimately meant I had to assume multiple roles, I was the (actor, writer, director, composer, producer, editor, sound design, poster designer, trailer editor) – everything! I directed five shorts during that three-year period and it was stressful balancing all these roles, it meant the films I made were unfortunately not as good as they could have been. Filmmaking is a collaborative medium, it was difficult for me to grow and evolve as a director because I was doing everything.

Once I began film school, I had to balance my day job at the theatre with the intense film programme. Since I had saved up 14K to attend film school, I wanted to make sure I utilised my time there incredibly well. I soaked up all the knowledge like a sponge, determined to learn from the experienced tutors and lecturers that taught me. I left the programme with two short films I was very proud of.

So, I had these two brilliant films and a masters degree, I genuinely thought I would get signed by an agent and go on to direct paid work. Well, this wasn’t the case. I didn’t envision how costly it would be to send my films to festivals. Overall I ended up spending over £6,000 to apply/attend the festivals I had applied to. I did all this whilst still working at the theatre. The reality that dawned on me upon leaving film school was I had to make even more films before the industry noticed me, even though I had two award-winning shorts that had screened at over 100 festivals. It took me another three years after leaving film school to get my first break in the industry.

To those that can afford it and are able to go, I always recommend film school. Prior to going to film school, my films were primarily homages to the films that I had watched in university. I made a lot of films that were strongly inspired by the work of Jean Luc Godard, Spike Lee, Vittorio De Sica and other filmmakers. There was no evidence of my voice in the work I was making, I was effectively almost remaking specific elements of their work in a British setting and landscape.

My growth and development as a filmmaker is tied to my Nigerian-British roots and identity. When I first moved to this country, I was made to feel like my Nigerian culture was not important or valid. I was regularly teased about my accent and told to go back home. An experience like that makes you question who you are. I definitely did. I tried to shun my Nigerian roots and totally embraced a British identity. However, as I began to make films and went to film school, I realised that my African culture made me quite special and unique from my British peers and colleagues. In my 20’s, I began to really evaluate who I was and what type of stories I wanted to tell.

Developing my voice took place in film school. I had a very long conversation with my tutor who asked me what type of filmmaker I wanted to be. He emphasised that making truly personal films that reflected who I was would result in powerful cinema. I was already questioning the type of stories I wanted to tell, so I made the conscious choice to create work that really reflected who I was. I completely embraced my Nigerian identity and worked really hard to tell stories that captured my culture from a diasporic lens and perspective. Filmmaking for me has been a therapeutic experience, it’s forced me to confront my past and my present journey. It’s made me more aware of who I am and my identity as a filmmaker. Completely embracing my identity has positively shaped and transformed my life and work.

What type of films do you want to make? What type of filmmaker do you want to be? I think it’s important that every aspiring filmmaker ask themselves these questions. I am so glad I did. Also, honing one’s craft can only be achieved by making a lot of films – in film school, I directed over seven short films in one year. I left school and continued to make more films. With each film, I grew and evolved, the lessons I learnt from each film informed the subsequent one I made.

In 2018, my short film The Right Choice had its world premiere at Sundance Film Festival. The experience of sharing my film at the festival undoubtedly opened a lot of doors for me in the industry. I had applied to Sundance five times with my previous shorts and didn’t get in. It was disheartening at first but I just concentrated on making films and didn’t let the rejections affect me deeply. Screening at the festival was a culmination of all the hard work I had put in, it resulted in a chain of events that has positively and profoundly impacted my career. I got signed to United Agents (UK) in 2018 and Creative Artists Agency (CAA) in America last year. I have been pitching narrative projects to several studios and platforms and I am currently developing an exciting slate of TV and feature films I can’t wait to share.