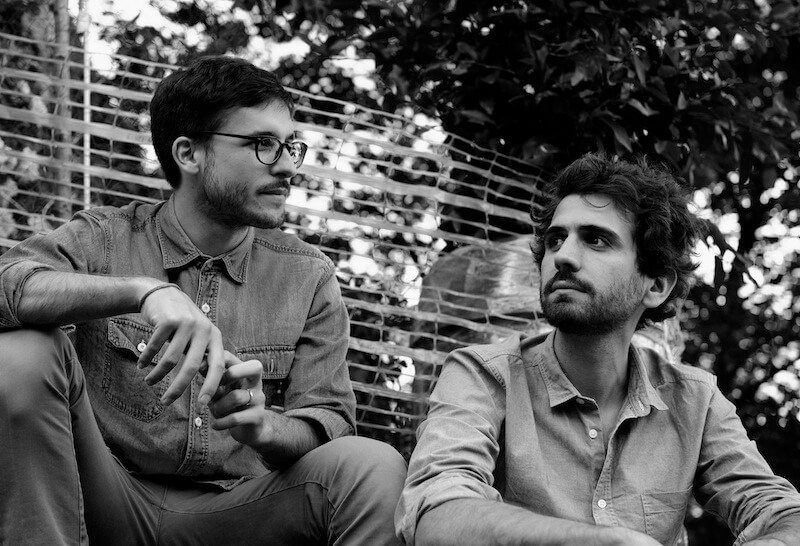 Truman & Cooper is a long story. Cooper makes his first films at the age of eight with his VCR while Truman dreams of becoming a rockstar. Their first playground is music but they quickly take pleasure in making experimental films together. Rather than solving the murder of Laura Palmer, they now create films for commercials, music videos and narrative content.

Jonathan Cohen-Berry: I knew I wanted to be a director at the age of 12. A school mate invited me to his house and showed me some movies he was shooting with his father’s VHS-C camera. He was editing them on a VCR and he was even able to add music and sounds to the recording with a special option on the VCR. I was very impressed and I asked him if we could make a movie together. From that day onward, we spent all our Saturday afternoons making new movies together and it was then I decided I wanted to become a director when I grew up.

Anthony Jorge: Like every good student in France, without knowing what I wanted to do, I studied sciences and went to an engineering school in Paris. I had the chance to have an apartment right in the centre, around the station called Odeon. This place is really famous for its amazing concentration of theatres. Because I didn’t really care about what I was actually studying, I spent all my time watching old movies in all the independent theatres around my flat, sometimes watching two or three films a day. I had no grasp on film culture before that. So when I discovered directors like Jean-Luc Godard, David Lynch, Terrence Malick, Wim Wenders (…) it was like discovering a new world and I fell in love with it. It took me a while to realise that I could be a director. After studying building engineering, architecture and urban planning, I worked as an urban planner for four years. However, in my free time, just for fun, I was making experimental (or silly) films with Jonathan, who was always carrying a camera with him. Even if it was a kind of dream, because it was so far from my background, I never dared to think “ok, I want to be a director”. But little by little, filmmaking took more of a place in my life until I really became one.

Jonathan Cohen-Berry : Growing up I was afraid that this was a very hard goal and I felt I needed a backup plan in case things went wrong. I studied Maths and Computer Science for two years at university and only after that, I decided to go to a film school in Paris (ESEC). I specialised in editing and visual effects because I wanted to learn something technical, to be able to work quickly and earn a living. Then I worked for seven years in visual effects, and in the meantime I was still shooting videos now and then. Then I teamed up with Anthony Jorge, a long time friend, and we started directing music videos together. That’s when things started to take off. I finally stopped my visual effects work and focused on directing.

The first serious music videos we made, were only possible because another friend of ours had already started to work as a DoP (Victor Seguin). On these videos we didn’t have a budget, it was for very small bands, but Victor was able to borrow cameras and lenses from all his connections for free. He also had skills we didn’t so was able to improve the look of our videos. So that’s the best advice I could give: when you start, try to surround yourself with people more experienced than you. They will really bring all their knowledge to the table and you’ll learn a lot faster.  A common mistake when starting out is to try to do everything yourself, to be your own DoP, etc…

Anthony Jorge: I would say that my first step was to quit my job as an urban planner, to be able to focus 100% on what really excited me. I was also playing music at this time. Even if I knew that I had a low chance of becoming a musician or a director, I wanted to give myself the chance to succeed. I gave myself one year to try everything I could… It was obviously really stressful and hard. I was totally broken but I think it was a really good decision. Then, I think Jonathan is right, it was all about gathering the good people around us sharing the same energy and will to try and experiment with us.

Jonathan Cohen-Berry: My biggest obstacle was myself. Basically making these first music videos is a lot of hard work and when the video eventually only had 300 views on YouTube after a few days, and then every production company you send it to doesn’t reply, you really feel down. At one point I wanted to give up. But I always had that kind of promise I made to myself to become a director that was burning in my stomach and forced me to try again. Also when I teamed up with Anthony, it was really helpful being part of a duo in terms of getting over our failures. When you’re a duo you can laugh off the failures and find the energy to try again quicker. When I wanted to give up, Anthony was able to give me the energy to try one more time.

Then after many tries, one of our music videos attracted attention (Kid Wise – Hope) and all the music videos and commercial production companies wanted to meet us. But of course that’s not the end of the story, after that we again did some bad work and some good work… It’s a never ending story.

Anthony Jorge : Because I had no background in filmmaking, the hardest thing was to fight against my lack of self-confidence. Every day was a fight, trying to convince myself I could do it. But it’s something I couldn’t have done alone. I managed to jump into the void because I knew I was surrounded by people like Jonathan and Victor (the DP Jonathan was talking about) and many other people who helped me to fill in the gaps of knowledge.

Jonathan Cohen-Berry: Watching a lot of movies and other’s people work definitely influenced us in terms of what we like and the style we wanted to develop. But I feel sometimes there is a difference between the type of work you like and the type of work you are good at doing. Simple example: in 2010, I was a fan of Wes Anderson. His style is very art directed, composed images, static, symmetry, matching colours and patterns etc… Everything is very calculated in advance. In my first videos I naturally wanted to do something similar. But the result wasn’t good. I didn’t have the skills, the eye (nor the budget) for that kind of strong art direction. When we finally did the ‘Kid Wise – Hope’ video, we went for a totally different approach, a lot more organic, handheld camera, lots of improvisation with the actors and no storyboarding at all (until then I was always relying strongly on storyboard). We just had a story in mind and a list of shot/ideas we wanted to capture and we really rely on the edit (my speciality) to put everything together and not plan in advance each transition, the order of the shots, etc. That way of doing things really suited my personality more. And that worked! The video felt a lot better than any work before. I think it takes time to really know yourself: what you are good at and what isn’t your thing, but when you do, things get a little easier.

Anthony Jorge: As I said in the beginning, we started by making silly films in our free time, actually just for fun. These films were really experimental. We were just following our instinct and taking a huge pleasure doing them. They were probably not extraordinary but I felt really proud of them. They were a real mirror of what we were. When we decided to really team up and make films “seriously”, we did the worst film ever. Because we wanted to look professional, we started to copy the films we liked, to do things in a very conventional way, with storyboards, conventional equipment, team, camera movements… Because we got really depressed by the result of these films, we decided to go back to basics. When Kid Wise trusted us for their music video, we decided to do things our way, like we did before. Instead of having a big conventional team, we gathered only a few friends and went back to our original energy, taking pleasure at experimenting with things together. I think it’s this freedom and pleasure to do things together, that allowed us to develop our own voice.

Jonathan Cohen-Berry: I’ll remain on that Kid Wise – Hope video because it’s the first ‘break’. We contacted some bands whose music we liked and proposed to make music videos for them. Kid Wise replied and were like, “Here’s a song. We have no money but we have a house in the countryside where we can spend a couple of weeks shooting something, and we have cool looking friends who can act in the video.” We liked the music so much that we went for it and wrote an idea based on these parameters. We invested a bit of money but really not much, like 400 euros. We convinced our DoP friend (Victor Seguin) to come too. He brought a Canon 5D and some lenses he borrowed for free. We brought a stylist, again a friend of ours, and that was it. We were a team of four and we shoot the entire video like that.