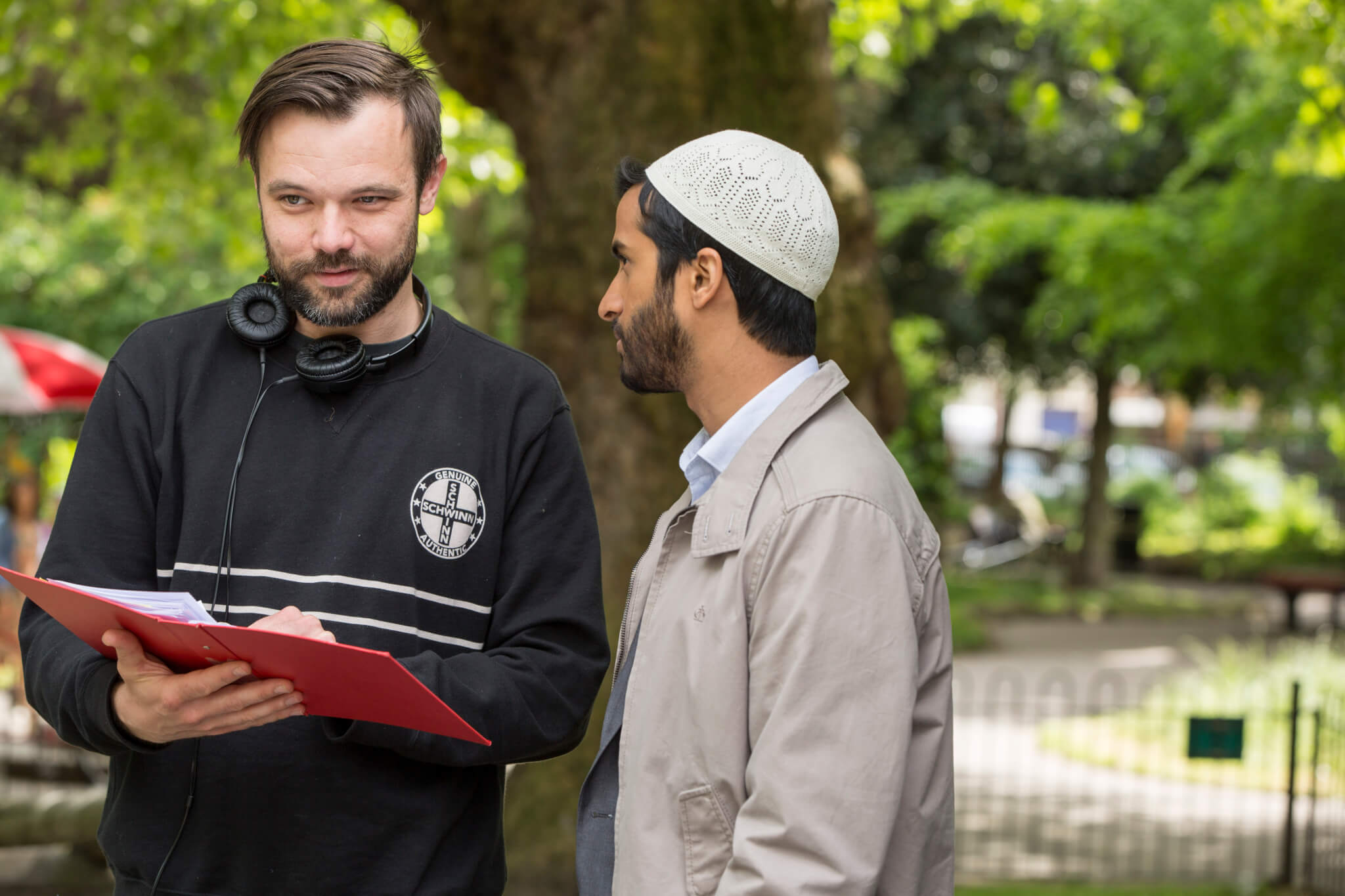 Al Mackay recently directed the political drama Cobra for New Pictures/Sky One. Before this, he directed Deep Water for Kudos/ITV, as well as the latest series of Humans for Kudos/Channel 4. He was also lead director on the Howard Overman, Netflix/E4 drama, Crazyhead, for which he was nominated for Best Director at the West of England RTS Awards in 2017. He was named on the BBC’s New Talent Hotlist 2017.

His previous TV credits include directing the closing block of Russell T Davies’ Banana for Red Productions, and the 4-part web-series My Jihad, which was released on BBC iPlayer, following the success of the original short, which Al also directed.

Al has written and directed numerous short films and his work also includes an online episode of Misfits for Channel 4, which was nominated for a BAFTA Craft award. Also a writer, Al developed his feature project The Den through iFeatures2, and was selected as one of eight writers on the SOS scheme.

I think I knew I wanted to be a be a filmmaker after leaving school. When I visited my sister in America one summer I had found a Super 8 camera at a flea market and started filming random stuff. So I knew I liked watching films and I liked filming things with this Super 8, but that was about it. I had no idea how to realise it as a career. I grew up in Rutland, where there was very little access to people or institutions to do with filmmaking, there wasn’t even a cinema.

After failing my A levels, I was under a lot of pressure to get into any university that would take me and study something ‘sensible’. The closest I could get to filmmaking was Media and Politics at De Montfort University in Leicester. I didn’t really focus on filmmaking while I was at Uni, apart from watching a lot of movies rented from our local video store. In fact, going to university probably distracted me from doing anything productive, and it wasn’t until I had failed at setting up a clothing label and spent years as a bar manager that I realised I had to sort my shit out and do something that I was passionate about.

The first turning point was seeing an advert in the paper for a course run by EM Media, a regional screening agency that was part of the UK Film Council. They had this course for 12 individuals that paid a small grant and gave an intensive full time course in Media Entrepreneurship and Employability. I got on and for 12 weeks I finally focused on what I wanted to do. It was during this time that I learnt a lot more about filmmaking and realised I wanted to be a director.

After the course I was given a placement on the Shane Meadow’s film This Is England. Initially I was given the role of trainee to the casting director, then because I had helped find Tommo Turgoose, I was offered to be his chaperone and shoot the behind the scenes footage, or EPK as it was called. I jumped at the chance and got the opportunity to be on set every day of the shoot. Watching Shane work was a crash course in filmmaking. But perhaps most importantly, I was immersed in the world of a film crew and became friends with the cast and crew, who would later be in my short films.

After This Is England, my goal was to gain more industry experience and make my own films. While working on a film called Better Things, directed by Duane Hopkins and shot by Lol Crawley, I was inspired to write my first short. Better Things was about growing up in the countryside, and it gave me the confidence to write about my own experiences growing up in the countryside, while the cinematography of Lol made me realise rural England could be as cinematic as America. This was also my first time working in locations, which ended up being my career for the following ten years.

The primary obstacle was a financial one. As an entry level member of crew, I’d earn enough money each job to pay the bills and live for the time I was out of work, I never had enough money to save for film school or make my own films. The second issue was not having any work to show, so it became a bit of a Catch 22 situation. To get onto a short film scheme like DV shorts, or apply to film school, you needed to show something you had made, and I had never made anything worth showing. That was my own fault, as I didn’t want to make a no-budget handy cam short, as that was not the style of short I wanted to make. So the industry viewed me as a crew member rather than a director.  This became a big obstacle.

I got my head down and worked in the industry and stuck with the location department. I found this the best fit for me, as it gave me a degree of autonomy, and plenty of down time on set, to either write, or learn from the director. After a few years saving I got together with a friend in the industry and we self-financed my first short film called Bale. We made it with Wellington Films who I’d met on Better Things, and I cast it from the friends I had met on This Is England. Everyone thought it was an ambitious first short, and it was. It was the most stressful summer of my life, the set burnt down, we had to make an insurance claim and the film remained unfinished for a year. But eventually the film gained completion funding from the UK Film Council, and this was the next key turning point.

Bale had really been straight from the heart, I didn’t really know what I was doing.  The next two shorts I used to start learning my craft and find my voice. I worked with actor Michael Socha on all these films and I think working with Michael was a key part of this. I also worked with DP Liam Iandoli on all these films, who taught me a huge amount about cinematography.  But most importantly it was the trust and openness that we had on these sets that allowed me to learn my trade, with only the pressures I placed on myself to make them as good as possible.

As I worked more in the industry I became a location scout for some great directors and producers who I learnt a lot from. Most notably Paul Andrew Williams and his producer Ken Marshall, who ended up executive producing my third short Hit and Run. Also Andrew Haigh and his producer Tristan Goligher, who is now developing my first feature. I always found long drives with directors a really privileged place to be, open chat without pressure offers a window into the creative process that’s hard to match.

The final turning point in becoming a working director came when my producer and now wife Rachel Dargavel screened my third short, Hit and Run, in Soho and invited all the main agencies. I think United were one of the only ones to come, and that is mainly thanks to Paul Andrew Williams who was repped there at the time. I cannot say after all this self-determined hard work, I wasn’t helped by friends in the industry, sometimes that is the final link you need.  I met Michelle Archer the week after and she agreed to take me on and has repped me ever since.

Getting an agent changes everything, suddenly you get to read scripts, and pitch on some of them. I got a pretty quick break once I was with United, I had a meeting to direct an on line episode of Misfits. The script was about a graffiti artist, and I think all that misspent time at uni paid off for once, as I had spent most of my time with graffiti artists and had a passion for it. I think a lot has to do with that personal link you have with a project. It allows you to pitch with a level of sincerity that really helps get gigs.

That’s why I was really worried about pitching on my next break, which was for a new scheme called BBC iPlayer Shorts. I didn’t feel like I had that personal link with any of the scripts. But the one I knew was the best script was called My Jihad. It was about a young Muslim couple who meet at a speed dating night. While I had never imagined directing a rom com, there was something very liberating about pitching a version of a rom com that felt right to me and I really got on well with the producer Claire Bennett and then the writer Shakeel Ahmed. This was a great experience for me in learning the difference between short film making and making TV. It’s using all those creative instincts, but shaping them towards a more collective vision. The short was very popular and got commissioned as a web series. It also caught the eye of Russell T Davies, which was good for me, as my next job interview was for his new show Banana. This was another opportunity to collaborate with amazing people. Charlie Covell wrote one of my episodes, who I also got to direct, while Russel wrote the other episode. This was the first time I had worked with a show runner, and was the beginning of a long road to understanding the idea of authorship in long form television compared to film. But that was me up and running as a jobbing director. I still learn as much at each job as I did back then, which is what I love most about this job.