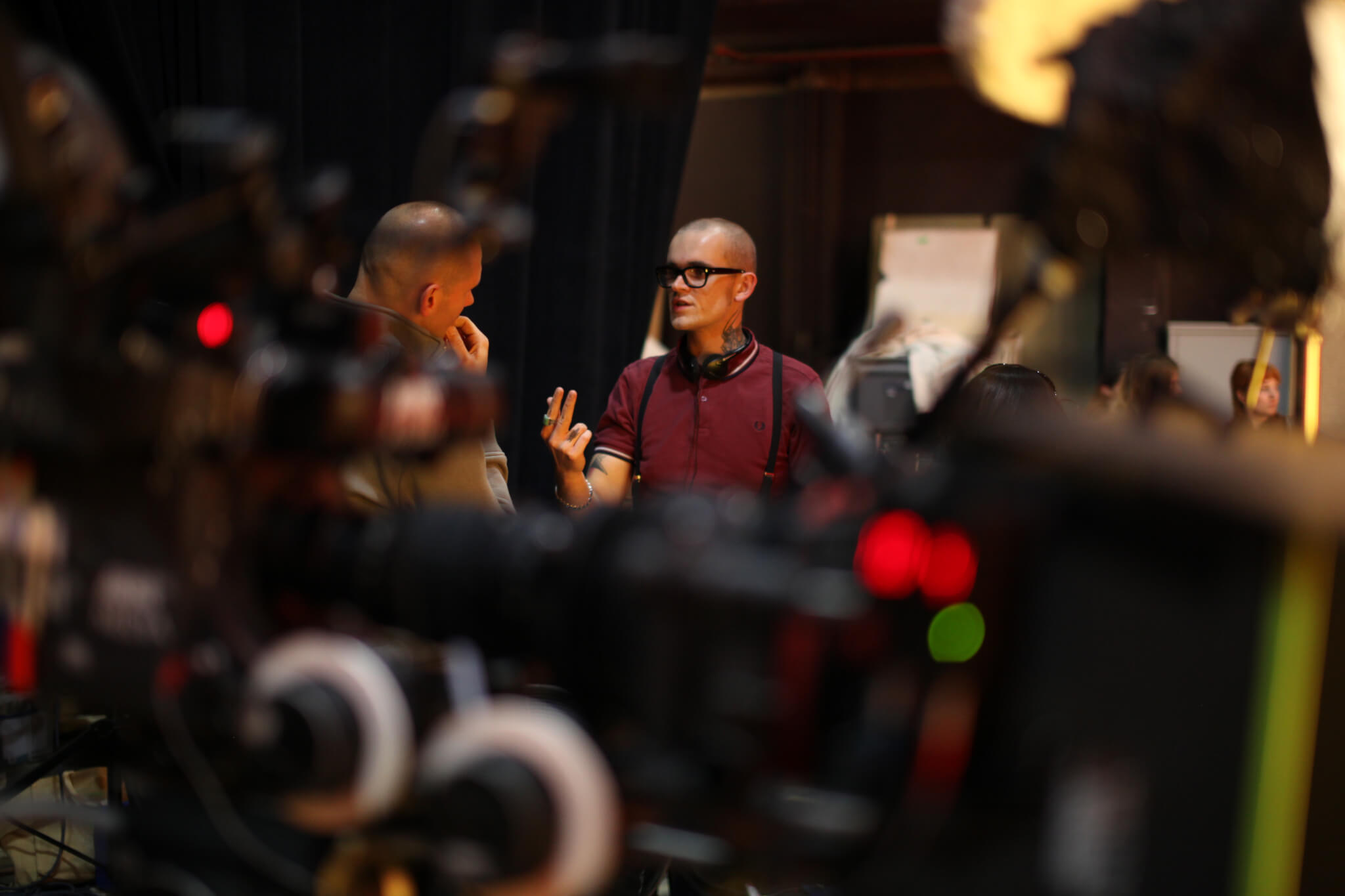 His first TV project – sci-fi comedy/drama The Spare Room was selected for the BAFTA Rocliffe drama forum in 2014. This led Louis to develop a number of genre-splicing projects for TV alongside BBC Comedy, What Larks Productions (Damned) and Hartswood Films (Sherlock, Dracula). Louis is currently developing long-form comedy/Thriller The Big Man with BBC Studios, and writing/directing his feature film debut with offbeat folk-comedy The Incomer alongside Stolen Pictures.

I think I always knew to some extent. Movies were such a huge part of growing up for me I don’t remember ever wanting to do anything else… except maybe a marine biologist, but when I realised it was less battling a giant octopus in scuba gear and more cataloguing endangered algae it became clear that my heart lay in film making.

I grew up in Edinburgh, my parents separated when I was young so movie watching became something my sister and I shared with our mum or dad. We rented thousands of VHS tapes (our family held the record for most rentals when they closed down) and when I found something I liked I’d just watch it over and over. I had an active imagination and the first movies I made were in my head, ducking around using my eye as the camera, casting my Action Men as characters in narratives based on Aliens, Predator or Robocop – or sometimes a mash-up of all three. My mum tells me I could have spent hours alone in a room shouting ‘GAME OVER MAN’ at my toys…

I got a mini DV camera in my early teens and made rip offs of Jackass and CKY, where I coaxed my friends into jumping off roofs whilst I filmed them. Then my mate Sean broke his collar bone and so we had to stop. This was also my first experience of editing, the possibilities and potential for creativity astounded me, I was hooked. I shot comedy skits with my pals and quickly learned that making people laugh was FUN.

I underachieved at school, so when I graduated it was either continue working as an usher at the Filmhouse Cinema or apply for an access course and pursue filmmaking. Thankfully I got into an HNC in TV Operations and Production at Telford college, where I got my hands on some proper kit and was able to work with a crew. My graduation film was a mockumentary rip off of Gone in 60 Seconds about a bike thief. It was mental, but really fun and got me onto a BA in Digital Film and TV at the RSAMD in Glasgow (now the Conservatoire).

Here I learned more about writing and directing and had the opportunity to collaborate with some incredibly talented acting students. I took advantage of the access to kit and crew and made as many shorts as I could. Most weren’t very good, but they allowed me to experiment and collaborate with others. During my graduation film, I had the first experience of developing a screenplay. I’d always written or co-written my own scripts, but this was the first time I had to take proper notes, I found it deeply frustrating, but ultimately rewarding as it resulted in a stronger screenplay (who knew?!). My grad film was way too ambitious – a zombie musical about a dancing plague with a dozen locations, scores of extras, special effects, a car chase and an epic musical sequence – but somehow we pulled it off and the film got me into my MA in Directing Fiction at the National Film and Television School.

I was a bit stunned to be honest, I looked at what the NFTS produced and it definitely was not mental comedy films. But Nik Powell assured me that’s exactly why they’d chosen me. So I set about making mental comedy films just like I had up north and quickly found that it was A LOT harder when you’re being interrogated about the ‘meaning’ of your work. It was no longer enough to just be funny and ambitious.

My MA taught me to interrogate my material in a way I’d never done before, to ask questions about the decisions I was making and to push for clarity in both my writing and directing. But perhaps the biggest gift the course gave me, was a thicker skin as a result of the relentless, merciless crits where each cut of your film is watched by a hundred staff and students ready to tear it apart.

My MA grad film was tough… I’d tried to be ambitious, making a 1940s-style musical comedy. We shot on 35mm, built two huge sets, borrowed half of Pinewoods’ lights and hired dozens of musical theatre actors. I had doubts and lingering concerns but I didn’t listen to them, I think I was just trying to hold everything together. In the end I made a film with some moments I’m very proud of but which didn’t work overall. It felt like I’d tripped at the last hurdle, (right when it really mattered most that I DID NOT TRIP). I should have trusted my instincts.

After graduating, I found an agent but no directing work whatsoever. I was living in London, barely able to afford day-to-day life even whilst working two part-time jobs. I had a lot of meetings that led to nothing and a lot of knockbacks that took their toll.

I got into a pretty bad place where I wasn’t being very creative and felt very dependent on the gatekeepers of the industry to let me in. Even making films for no money felt impossible, living in London is so expensive that it’s hard for people to take time off to work for free.

Whilst generally speaking, you need other people to make films, you don’t need them to write so that’s what I did. I completed my first TV spec script which was selected for BAFTA Rocliffe, then my agent and I contacted everyone we could off the back of it and it was optioned by the BBC. More writing work followed, and soon I was developing TV and film projects which allowed me to support myself financially.

The longer I do this the more I’m drawn to where I came from. When I first started making films I did it for the joy of creating and collaborating with friends. Ultimately I wanted to make people laugh, to make them feel JOY. I lost that when the pressures of forging a career and making a living piled up. My early work in Edinburgh and Glasgow had a strong identity and a raw authenticity to it, which I forgot to some extent when I went through the NFTS. But conversely it was at the NFTS where I learned the professionalism and personal interrogation in both writing and directing that made my work more successful.

I developed my voice through marrying the joy and irreverence of my early work with the skills I learned in further education. A few years after graduating, I made a funded short through Film London which allowed me to tell a more personal story and I wrote a feature directly inspired by my upbringing in Edinburgh.

I write a lot. I’ve written numerous features and TV shows, some of which have not been picked up for further development. But it was through writing these that I found success with later projects. Each project that may not have found its home, still opened doors for me or initiated relationships with producers that paved the way for something else.

I also think it helped that I said yes to things. I believe that if you focus on one goal too strictly, you can miss other opportunities and so I have tried to stay open to them. If I’d stuck too close to my goal of being a director, I would have missed the opportunity to be a writer too and to develop skills in storytelling that have made me an even better director. Because of my willingness to try different things, I’m now in the position I always wanted to be; writing and directing a comedy feature.

My first break was as a writer just after BAFTA Rocliffe when I had a meeting with Sue Vertue who produced Sherlock. I was convinced she wouldn’t be interested in my work, so I just talked about my friends back home, making her laugh and being myself. I didn’t ‘PITCH’ and as a result we got on really well. She gave me my first commission there in the room. If I can give one piece of advice it is not to go into meetings SELLING HARD. By all means know your work inside out and be ready to pitch… but make it conversational and find your personal way in. People are investing in the individual as much as their projects, especially if you are a writer/director. They want to know why YOU are the best person for this job and what it is that YOU can offer.

The TV project I developed with Sue was very personal, based on a friend of mine from back when we were throwing ourselves off garage roofs and I was filming it. The script we developed has found me more work than anything else I’ve produced and this is because it’s a story only I could have written. Ultimately, the more I draw upon my personal experience the less chance I have of pitching something someone else is also writing. Loads of people can make films and there is no shortage of talent, but nobody can do it the way you do… So you do you!

And don’t be a dick. That helps too…